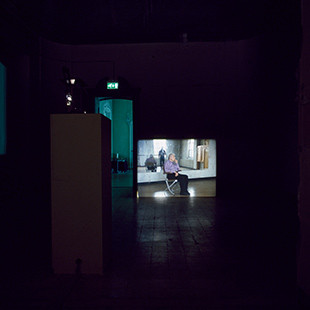 From May 12 to June 21, 2009, Fondazione Nicola Trussardi presents Still Life, Tacita Dean’s first major solo exhibition in Italy, on the first floor (piano nobile) of Palazzo Dugnani, a historic building in the centre of Milan opened in collaboration with the Municipality of Milan-Culture Department.
The exhibition—one of the most ambitious projects ever realized by the English artist—presents a selection of fourteen works, including the world premiere of two films commissioned and produced by Fondazione Nicola Trussardi. Tacita Dean is one of the most important artists at work today: she has been nominated for the Turner Prize, awarded the prestigious Hugo Boss Prize by the Guggenheim Museum of New York, and has previously exhibited at some of the world’s greatest museums, including New York’s MoMA and London’s Tate Gallery. Tacita Dean’s films, photographs, and installations construct entire universes out of interminable pauses, by exploring distant, unattainable horizons. With her slow, reflective gaze, the artist opens a window onto a vanished world, transforming every landscape, object or character into an exquisite still life in motion. Her films are little revelations, shot and reproduced rigorously in analogue form: in the exhibition, strips of 16mm celluloid are fed through projectors that stand like extinct dinosaurs. Tacita Dean’s works are monuments to the country of last things, vanitas describing a world that has been and is no more.
For Still Life, Dean has chosen to show only film, making a circular journey through the rooms of the palazzo, moving from works related to portraiture to those about natural phenomena, landscape and the sea, and then into a recent group that reference still life.
For her exhibition with the Fondazione Nicola Trussardi, with the assistance of the Museo D'Arte Moderna di Bologna Tacita Dean obtained access to an extraordinary location: she was invited to visit the Bologna studio of painter Giorgio Morandi and film the original spaces and furnishings of the small studio in Via Fondazza where Morandi worked for over 50 years.
Her two new films capture the traces left by Morandi and reconstruct his meticulous explorations: in Still Life (2009), which lends its title to the entire show, Tacita Dean focuses on the meticulous markings and measurements found on the paper Morandi placed underneath his objects. A cartographer in search of lost time, Tacita Dean rediscovers Morandi’s work through marginal, forgotten signs. In Day for Night (2009), Dean looks at Morandi’s objects themselves. Unable to touch or move the bottles and vases, Dean filmed them singly, making random groupings in contrast to Morandi’s studied and mathematically rigorous compositions
Tacita Dean has often paused to analyze great figures in art history: from Mario Merz (2002)—an intimate portrait of the master of Arte Povera, to be shown for the first time in Milan, the city of his birth—to the six recent films composing Merce Cunningham Performs STILLNESS... (2007), in which the great avant-garde choreographer dances to John Cage’s radical 4’33”, accompanying the silence of this musical composition with static poses. With the six films of Merce Cunningham Performs STILLNESS...—presented for the first time in Europe in this exhibition—Tacita Dean draws a solemn portrait of the great dancer and plunges viewers into a rarefied atmosphere in which time expands beyond all limits.
To Tacita Dean, nature is an inexhaustible repository of forgotten stories and unexpected coincidences: with her slow contemplative films, the English artist transforms atmospheric phenomena, pastoral landscapes and abandoned places into sublime panoramas and cinematic frescoes shorn of collective memory. Her pieces are romantic vistas that harbour unexpected surprises: from the solar eclipse in Banewl (1999)—shot almost in real time on a farm in Cornwall—to the disquieting shadows in Diamond Ring (2002); from the single frame capturing the last ray of sun as it passes over the horizon in The Green Ray (2001), to the difficult crossing of a hostile, stormy sea in Amadeus (2008), Tacita Dean’s narratives are mechanisms which reveal elapsed worlds.
With the same attentiveness, the English artist collects seemingly insignificant objects, like the surface of a piece of fruit inside a glass jar: a praise of slowness, Prisoner Pair (2008) is a microscopic analysis of the signs of time.
For the mesmerizing, monumental setting of Palazzo Dugnani—built as an aristocratic residence, later the home of Milan’s natural history museum, then of the first school in Italy where art history was taught and currently owned by the Municipality of Milan-Culture Department—the English artist has conceived an exhibition that reveals the building’s majestic architecture and private rooms. Reopened by the Municipality of Milan-Culture Department in collaboration and with the support of Fondazione Nicola Trussardi, the first floor of Palazzo Dugnani is used for the first time as a venue for a contemporary art exhibition – an event that celebrates a new synergy between the Municipality of Milan-Culture Department and Fondazione Nicola Trussardi, both committed to make historical buildings available to wider audiences.
Looking out onto the gardens of Via Palestro, Palazzo Dugnani was built as a patrician house in the 17th century and was then remodelled in the 18th century. The Baroque edifice contains a magnificent fresco by Tiepolo, as well as work by Ferdinando Porta and the Venetian School of the 1700s. Palazzo Dugnani remained in private hands for centuries until it was bought by the City of Milan to house the Alessandro Manzoni secondary school for girls. The layering of personal stories and images in motion makes Palazzo Dugnani an ideal setting for the work of Tacita Dean. Still Life is a unique opportunity to discover this artist’s melancholy narratives.
With Still Life, Fondazione Nicola Trussardi continues to produce works by today’s most interesting artists for the forgotten monuments of the City of Milan. Since 2003 the Fondazione Nicola Trussardi has organized exhibitions with, among others: Michael Elmgreen & Ingar Dragset, Darren Almond, Maurizio Cattelan, John Bock, Urs Fischer, Anri Sala, Paola Pivi, Martin Creed, Pawel Althamer, Peter Fischli & David Weiss, and Tino Sehgal.
www.fondazionenicolatrussardi.com