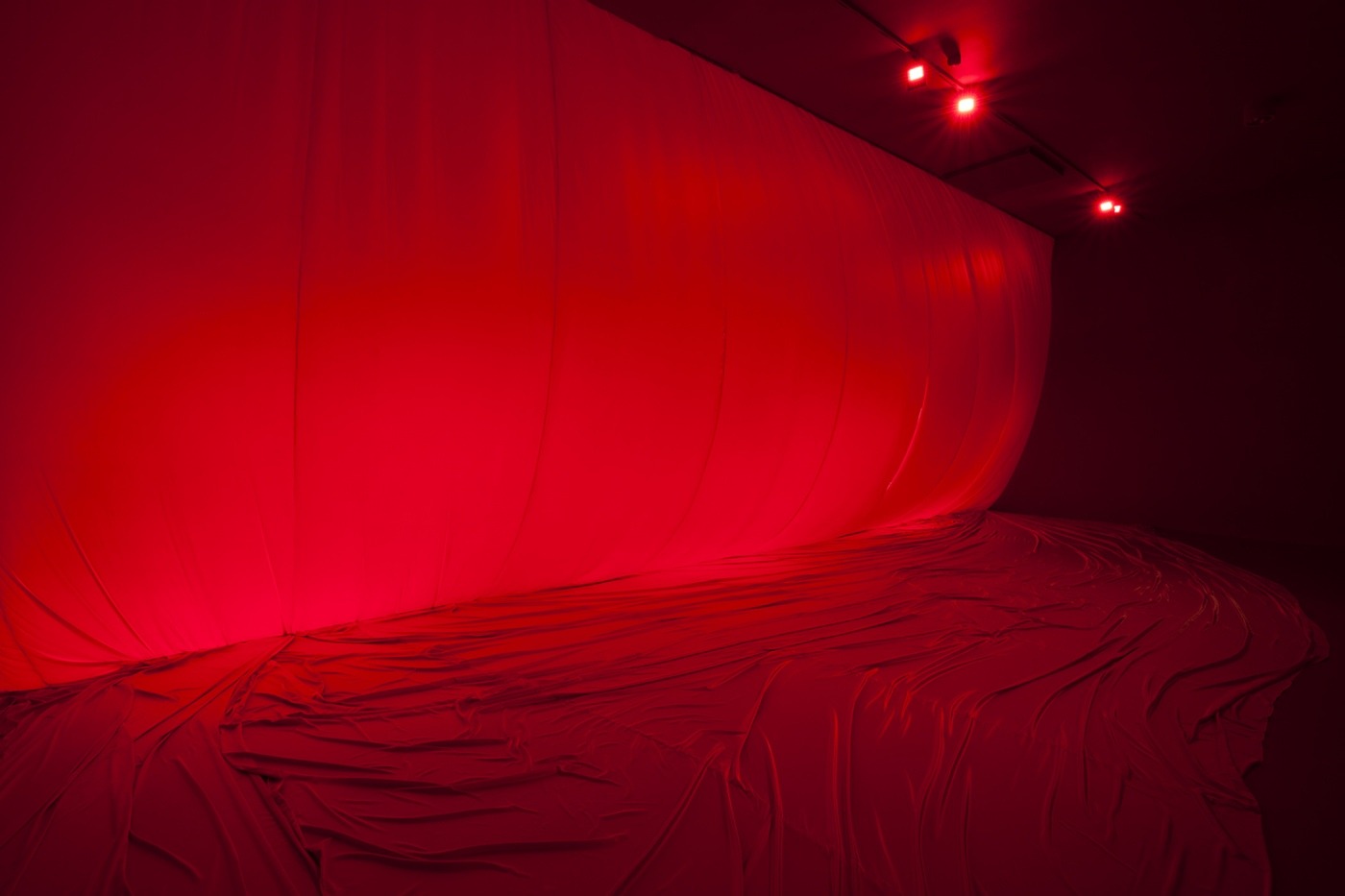 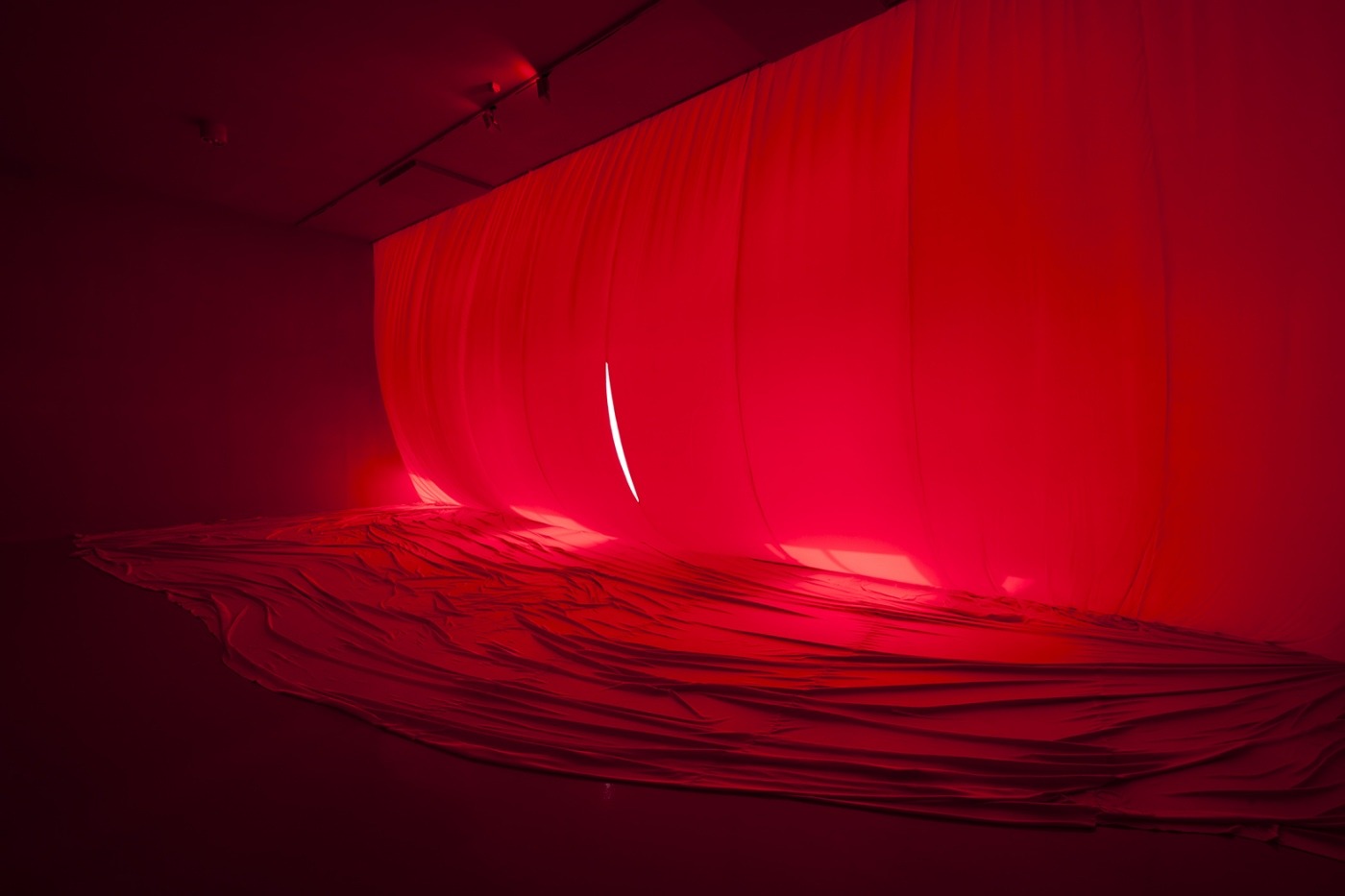 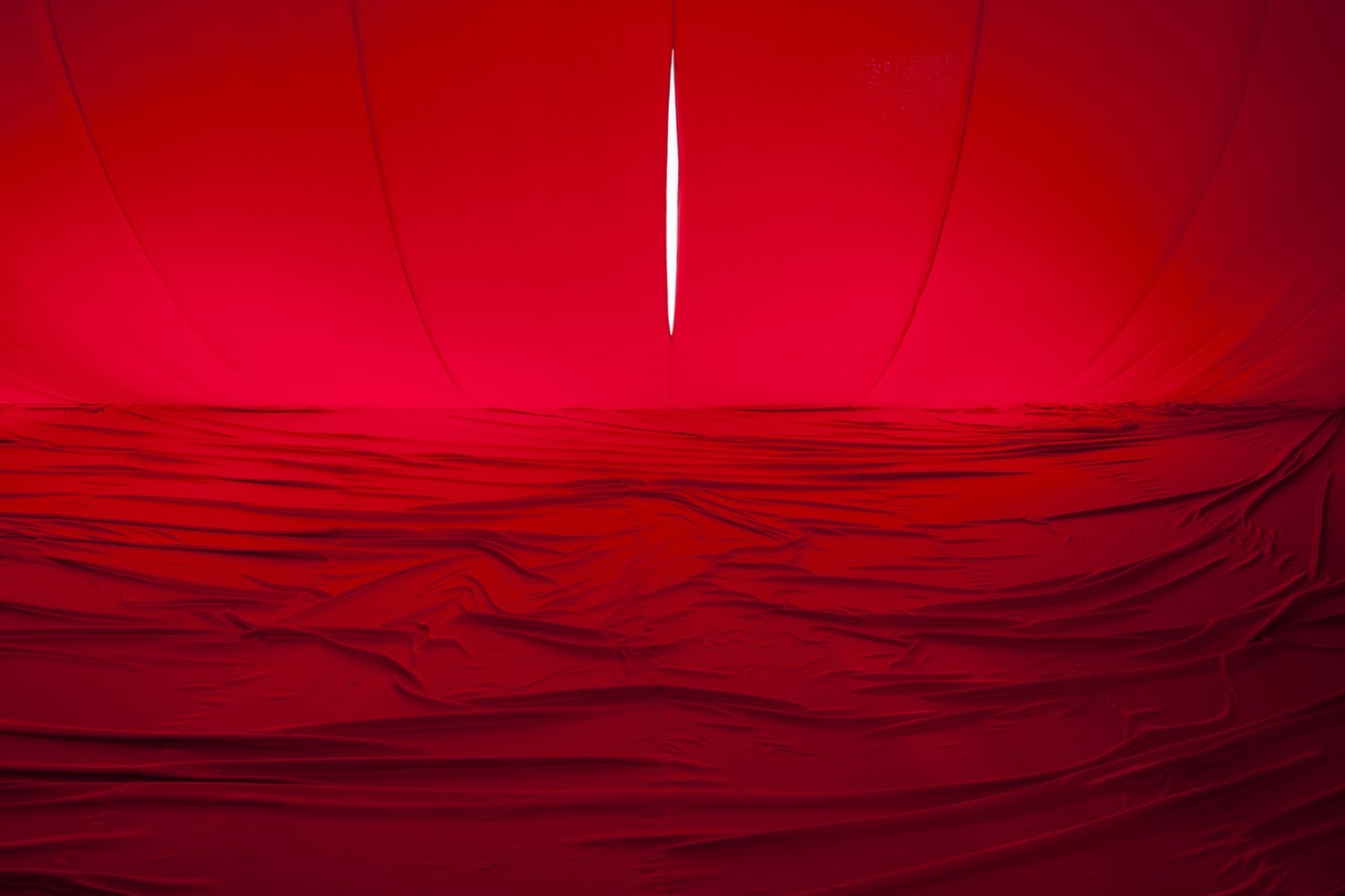 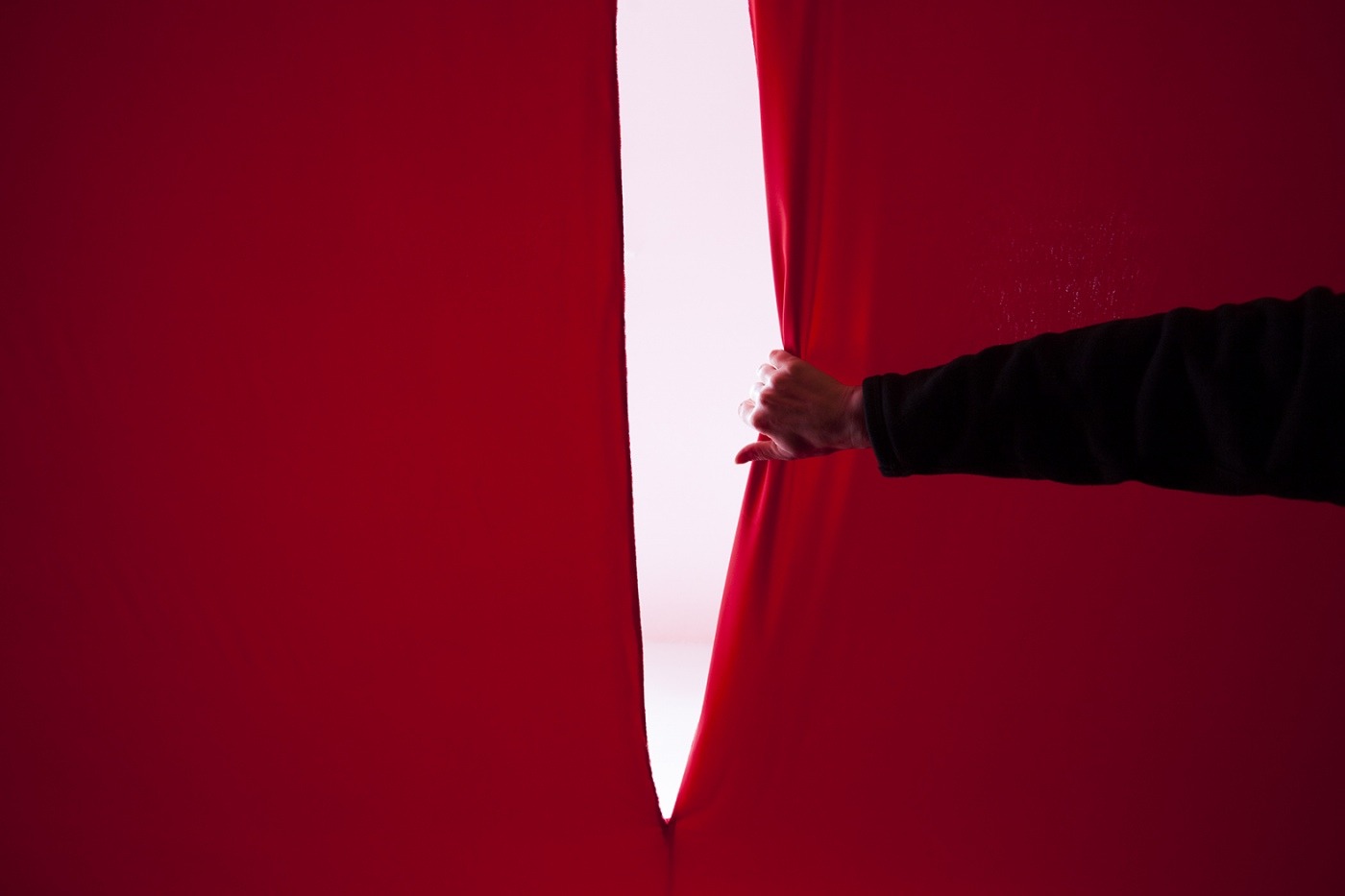 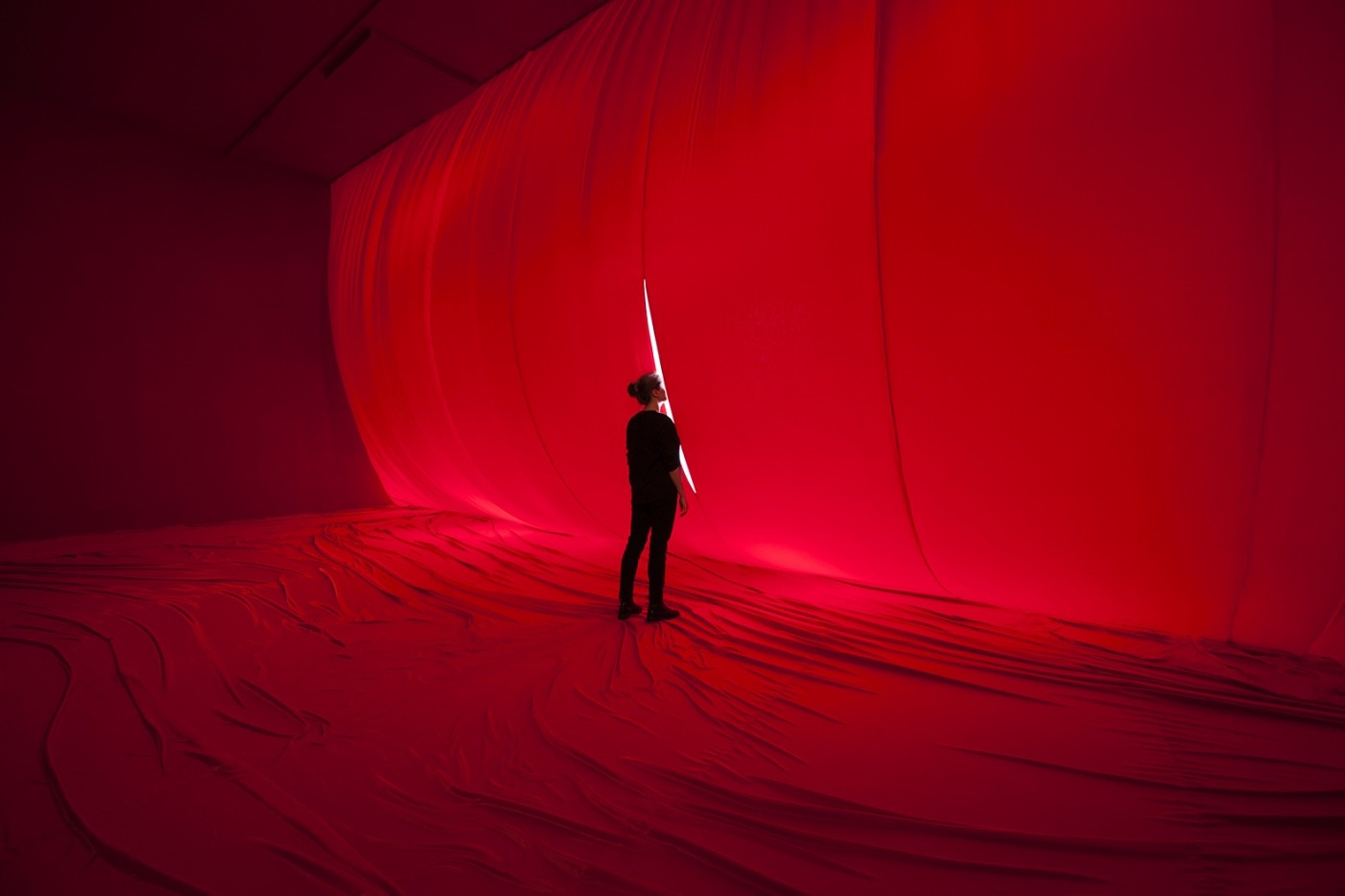 Kornelia Dzikowska, Power Play, 2020, exhibition view at Ujazdowski Castle Centre for Contemporary Art, Warsaw
Kornelia Dzikowska’s Power Play is this year’s first show in the Project Room series at the Ujazdowski Castle Centre for Contemporary Art. Instead of an exhibition, the artist decided to create a site-specific installation. Dzikowska divides the Project Room space with vertically suspended fabric, creating two interdependent areas. As the airflow causes the curtain to strain, it annexes the surface of either parts of the space. The side gaining advantage cannot ever be certain of itself – the situation may reverse at any time. In this way, the artist talks about the essence of power – confrontation, negotiation, uncertainty, and continuous tension. Dominating the space, the colour red symbolizes passion, lust, and danger, and suggests a state of emergency.

Project Room is dedicated to presenting the work of emerging Polish artists. All the works presented as part of this series are new and created especially for this space. This year edition includes exhibitions by Kornelia Dzikowska, Jan Baszak, Adelina Cimochowicz, Piotr Bruch, Sebastian Sebulec, and Marek Wodzisławski. In January 2021, an international jury will choose two projects that will be awarded with 20,000 PLN and 10,000 PLN.

Kornelia Dzikowska (b. 1990) is a visual artist and a PhD student at the Warsaw Academy of Fine Arts. Two-time recipient of Minister of Culture and National Heritage fellowships, winner of the main prize in the Esteemed Graduates of International Academies of Fine Arts in 2018, she was a research fellow at Akademie der Bildende Künste in Stuttgart, and at Universität der Künste in Berlin . She also holds a degree from the Leon Schiller National Higher School of Film, Television and Theatre in Łódź. Author of spatial and multimedia installations, often of site-specific nature. She also designs visual space for theatre performances.