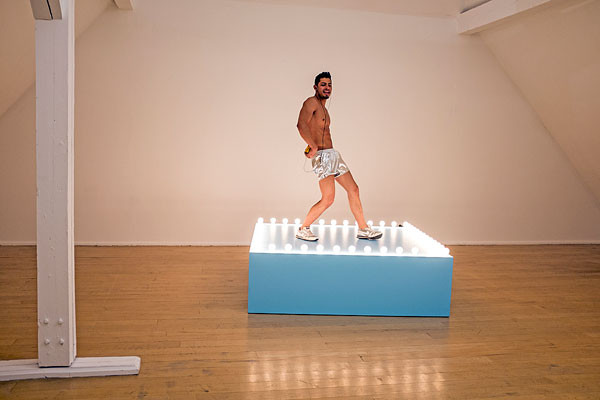 Works by Larry Clark, Rosemarie Trockel and Elaine Sturtevant from the collection of MMK Museum für Moderne Kunst Frankfurt am Main exhibited at the Ursula Blickle Stiftung in the Kraichgau region of Baden-Württemberg, Germany Philip Bußmann and Julian Gabriel Richter in cooperation with Mario Kramer

The year 2016 will mark the 25th anniversary of the Ursula Blickle Stiftung in the Kraichtal. To commemorate this occasion Julian Gabriel Richter and Philip Bußmann, in collaboration with the foundation’s board members and curators, are showing a two-year exhibition series on the subject of body and movement and spatial awareness and dance through the prism of contemporary art. As the first exhibition in this anniversary series, “Parade” in cooperation with Dr. Mario Kramer, Head of Collection at the MMK Museum für Moderne Kunst, Frankfurt am Main, shows among others the highly acclaimed photography series Tulsa 1963–1971 by the American artist Larry Clark (*1943), as well as the seldom-seen videos by German artist Rosemarie Trockel (*1952). The Video Parade, which was created in 1993 and is the namesake of the exhibition, shows stylised white silkworms, elegantly moving in front of a blue background and arranged in a sort of a parade.

Elaine Sturtevant (1924 – 2014) is regarded as a key figure of American pop art and concept art. Two pivotal works by the artist can be viewed at the exhibition. On the opening and closing evenings of the exhibition the work will be rounded off by a go-go dancer performing on the platform of the work of Sturtevant, Gonzales-Torres Untitled (Go-Go Dancing Platform), (1995).

Within the framework of all four exhibitions the video artist and set designer Philip Bußmann (*1969), is developing a reading room on the first floor with catalogues and materials covering the last 25 years. Talks and discussions as well as lectures are planned during this period.
www.ursula-blickle-stiftung.de