In the End was the Word 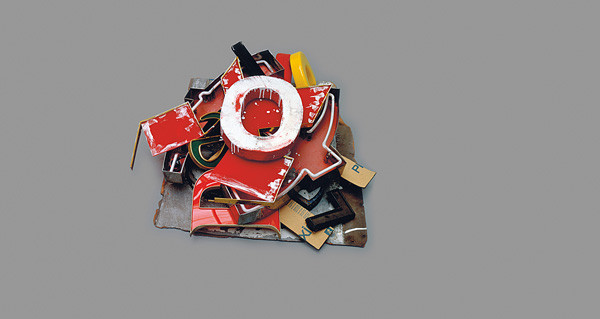 Anyone who attentively studies the wealth of possible media in the contemporary visual arts will be struck by how much text in its diverse forms and statements has become a central theme of current aesthetic strategies—seemingly as an ultima ratio. This attitude, which was anticipated by conceptual art, signifies a turn away from the world that can be experienced sensually and necessitates that the viewer reenact the text mentally. At the same time there is also an aestheticizing of linguistic symbols that communicates meaning. The arc spans from neon signs to painted text, from the project of combinations of text and images to forms derived from the world of comics or advertising. This international anthology demonstrates, in part by the ironically modified biblical citation of its title, a quasi-final position.
Artists: Azt, Bernard Faucon, Heinz Gappmayr, Alex Gingrow, Franz Graf, Siggi Hofer, Jenny Holzer, Siggi Hofer, Zenita Komad, Ignas Krunglevicius, Mikko Kuorinki, Simon Linke, Marko Lulic, Ken Lum, Marzia Migliora, Maurizio Nannucci, Raymond Pettibon, Jack Pierson, Paul van der Eerden, Jorinde Voigt und Hank Willis Thomas
www.ursula-blickle-stiftung.de