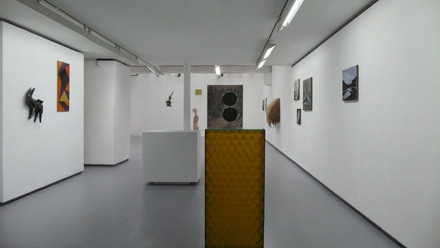 "The more stuff in it, the busier the work of art, the worse it is. More is less. Less is more. The eye is a menace to clear sight. The laying bare of oneself is obscene. Art begins with the getting rid of nature." Ad Reinhardt
In 1987 director Michael Blackwood produced a documentary entitled 4 Artists : Robert Ryman, Eva Hesse, Bruce Nauman, Susan Rothenberg. The documentary was described as:
A collective portrait of 4 artists linked only by their stated intention of expressing ideas through art, unconnected to traditional concepts of beauty, storytelling or pictorial representation.
An explanation of seemingly accidential choices. Yet, as we discover within this tenuous connection there lies a common asthethic and prinicipal of minimalism, magnified especially in the method of portrayal in the film, and from which it is to become, in many aspects, the invesigative point of departure in today’s post-minimalist approach.
The same thing can be said of the 4 artists in this exhibition. They were brought together not so much by their commonality in approach than their peculiar way of seeing untraditionally. Together they capture something at once melancholic and poetic, both enigmatic and profound.
Sophie Dubosc was a graduate from Diplôme de l’École Nationale Supérieure des Beaux-Arts (DNSEP) in 2002 and she was the recipient for the Prix Altadis in 2006.
Andrew Mania have had solo exhibitions at John Connelly Presents in New York and Jack Hanley Gallery in San Francisco. He is represented by Vilma Gold Gallery in London.
Anne Neukamp is a recent graduate from Hochschule für Bildende Künste (HfbK) Dresden. She had recently presented work at Air Garten in Berlin and La Generale in Paris.
Gitte Schäfer have had solo exhibitions at Galerie Chez Valentin in 2006, Perry Rubenstein in New York and gallery Kirkhoff in Copenhagen. She is represented by Galerie Chez Valentin.
www.galeriechezvalentin.com