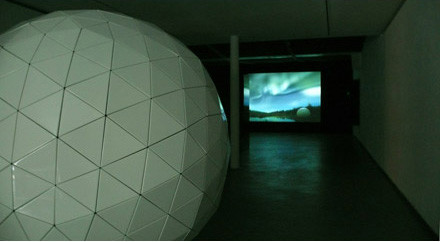 In 1619, Galileo used the term « aurora borealis » for the first time to designate what Aristote had described in earlier times as « the tears of the night sky behind which one can see flames.» Almost three centuries later, an engineer of serbian origin named Nikolas Tesla withdrew himself deep into the mountains of Colorado Springs to witness first hand these electromagnetic waves. In the numerous self-imposed confinements in his laboratory, Nikola Tesla discovered the static wave phenomena and conceived the premises for a gigantic wireless energy transmission system. Tesla tempted to prove that a large amount of electro-energy can be transmitted in the outer atomsphere regardless of distance. One would suppose, by consequence, that electro-energy can be transitted to anywhere around the globe. Facing this predication, Tesla decided to withdraw all his investment in the project in the pretext that "If everyone can draw energy where will we put the meter?"
Although Nikolas Tesla’s laboratory was out of commission soon after, his research on the aurora borealis (or northern light) and its capacity to reflect electromagnetic waves continued to prove as an important hypothesis for similar research conducted by the American military. The case in point is the “High Frequency Active Auroral Research Program” or HAARP, a research program specialized in the application of high frequencies to the ”aurora borealis” in Alaska. If the official explanation for this program is to research the property of the upper atmospheres such as how ionospheric disruptions (or magnetic storms) can affect worldwide radio communication, there exist numerous rumors speculating it’s secret military implications; i.e. to control the climate, to provoke earthquakes, to influence the human behavior, etc.
Taking this spectacular natural phenomenon and the possible military implication as a backdrop, the video 1619 by Laurent Grasso presents an aurora borealis along with its vibrations of colors scattered above a a replica of the geodesic dome imagined by Buckminster Fuller. It is represented also as the sculpture 525 and again reappears in Echelon, a model of a network of these geodesic domes of the same name presented inside a black and semi-transparent encasement. Although 1619 was inspired by natural elements, it is how Laurent Grasso leads the viewer to focus on the artistic creation which necessitates the mastery of mathematical calculations and of complex mechanical phenomena that prove to be the most interesting. Created in 1947, the Echelon network was designed as a vast listening program that can controls and intercepts public and private communications. Inside each of these geodesic spheres there are antennas spread out across the interior. 525 and Echelon play in the same ambiguity of appropriation and their representations alternate between complex natural phenomena, inspired forms of geometric structures, and their scientific and military implication. However muted as they are as objects, they nevertheless function as important tools for « seeing» and «listening », serving as the "eyes" and "ears" in the world of surveillance. It is here that we recall the soundproofing wall that reflects light from the projection on the opposite wall of the gallery. In summary, Laurent Grasso neither tries to illustrate nor to document these research domains. Furthermore, the existence of these domains are by and large acknowledged. They constitute as a hypothesis and as a projection on a reality that is physically and mentally difficult to access. This is thus the case in his new video TimeDust. TimeDust was filmed at an observatory in the New Mexico desert where a heat induced cloud causes an optical illusion, – or perhaps the optical illusion results from the break up of temporal particles, or "time dust" – around the antennas of the astro-telescopes. Whether it is to question how these conditions are harnessed, their apparition, and or to question simply the projected images, the works by Laurent Grasso open the field to the elaboration of speculative fictions, giving challenge to the opacification of what we commonly calls "reality".
www.galeriechezvalentin.com