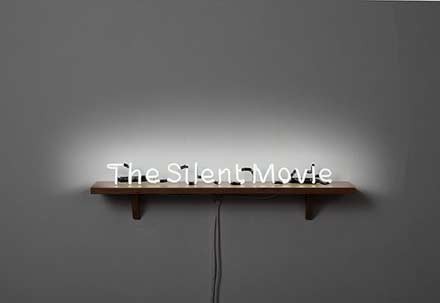 Silent Movie was produced for the 8th edition of Manifesta, in Murcia, Spain, where Laurent Grasso was invited to exhibit. Presented in parallel at the Galérie Chez Valentin in Paris, the film presents barely visible military constructions along the Cartagena coastline. The film consists of a silent approach over the coastline strongholds, adopting an alternating point of view of both the attacker and the besieged. The fortresses and baterias, built in various styles according to their respective eras, trace the development of surveillance architecture and put into perspective the idea of a new and ever present enemy.
Silent Movie could well represent a generic expression of the artist's work, which continually interrogates tensions between what is visible and what is concealed. The concept of invisible surveillance in military and prison-like environments references the Panopticon system, devised in 18th century by English philosopher, Jeremy Bentham. The Panopticon is a structure that allows a single observer placed in a central tower to survey over his prisoners without their knowledge. The system allows the observer to develop a sense of permanent omniscience. These tower-like fortresses are directly linked to this visibility principle. By their very appearance they portray both an external visible threat whilst at the same time embodying a form of invisible omniscience, an absent force, which finds directs parallels with the themes of Laurent Grasso's work. When regarded as an architectural object- a deserted military edifice- it's form takes on an autonomous existence, which provokes an unconscious reaction specific each person who sees it. By examining the filming conditions and projection of the images, Laurent Grasso creates situations that both unsettle the conscience and provoke the will to question. In the same manner with which Paracinéma presents abandoned decors and Haarp and Echelon portray a mysterious military reality, Grasso's work examines the status of an image that depicts inaccessible territories. His work, however, do not aim to document the themes invested in his art. In Silent Movie the absence of commentary, explanations or defined points of view reveal an implicit form of construction whereby references are systematically erased. The camera itself, as a tool of perception, is placed in the centre of an ambiguous reality. The use of static shots stretch out our notion of time and allow enigmatic images to surface within our perception the frame. The tensions between the physical accessibility of the discourse and the unstable footage give way to a range of assumptions that lead the film itself toward semi-abstraction.
Between the film and the projection, these discourses are replayed not only in terms of the form of their presentation but also in their possible interpretation as devices of societal control. Isolated and mute, the bateria structures become metaphors of our contemporary society. Instigated by the silence that inhabits them, the spectator is forced to experience the inherent rapport that we have with architecture. This silent exchange is the result of an aesthetic, emotional, but nevertheless attentive encounter. These mechanics of perception, which repeatedly play with impressions of the "déjà vu" and the "jamais vu", are themselves integrated into Laurent Grasso's work where the meeting between the principle of omniscience and concealment of the image reaches it's climax.
Recipient of the Marcel Duchamp prize in 2008, Laurent Grasso is also the subject of an important monograph entitled, Laurent Grasso: The Black-Body Radiation, published in 2009. In the same year, the Centre Georges Pompidou devoted an exhibition to his work named The Horn Perspective, in which the artist reconstructed the Horn Antenna, a device invented in order to measure the radio waves created by our galaxy, originally created in 1964 by two American astronauts. Also in 2009 the artist created the Nomiya Project, a futuristic capsule restaurant made of steel and glass placed on top of the Palais de Tokyo in Paris which, depending on the light reflecting through it, took on a fictional appearance. Laurent Grasso is currently showing the exhibition, "Sound Fossil", at the Sean Kelly Gallery in New York and a neon work entitled Memories of the future which is exhibited on the façade of Leeum, Samsung Museum of Art, Seoul, Korea. Grasso has also participated in the 8th edition of Manifesta, The European Biennal of Contemporary Art.