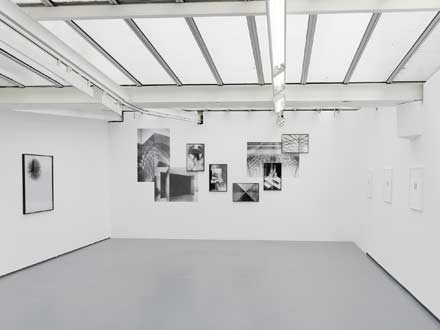 Papier photo brings together five artists who work with photographic documents and explore the ambivalence of the documentary image rather than its clarity. In so doing, their images suggest the obsolescence of photography.
The exhibition takes its starting point in a research project on the document as an art form in contemporary art. While documents are conventionally viewed as stable facts and valued as pure content, a number of artists, on the contrary, understand the document as a form that is only read in terms of its content. These artists use the conventions of presentation of documents and the discursive practices to which they are attached in order to pull them apart and to reflect on the production and circulation of information, and often on the very nature of the knowledge. Through this critical process, their work exposes the instability, the equivocal quality of the document rather than its unquestionable evidence.
Haris Epaminonda’s (Cyprus, 1980) Polaroid pictures reflect this ambivalence through the adoption of an almost obsolete technique (the recently resurrected Polaroid) to show images that seem far older and strangely appear to be thrust into the present.
Alexandra Leykauf (Germany, 1976) produces vertiginous architectural spaces and mirror images from found and manipulated photographs. Their assembling blurs the perception of definite spaces and objects. The photograms of Amy Granat (USA, 1976) create an unsettling contrast between the translucent forms of objects drawn by light on paper and the blurred opacity of damaged paper.
Pierre Leguillon’s (France, 1969) reflection on photography is developed mainly through the subtle appropriation of mundane devices and procedures such as the slide projector, the presentation of archives and documents and the sale of a collection, which he turns into forms of exhibition display.
Shannon Ebner (USA, 1971), questions the heritage of conceptual photography through an exploration of language and visual signs. Playing with signs and words, her photographs and objects ambivalently evoke both found and man-made forms.
Resorting to an array of techniques ranging from Polaroid to photomontage and from printed image to collage and photogram, the works presented in Papier Photo question the univocal quality of the document through the material quality of the photographic image that is pushed back beyond the limits of its intelligibility.
Sophie Berrebi writes about art and is a lecturer in the history and theory of photography at the University of Amsterdam. She is currently completing a book length essay entitled Equivocal Documents: Photographic Documents in Contemporary art.
www.galeriechezvalentin.com