You don't need eyes to see 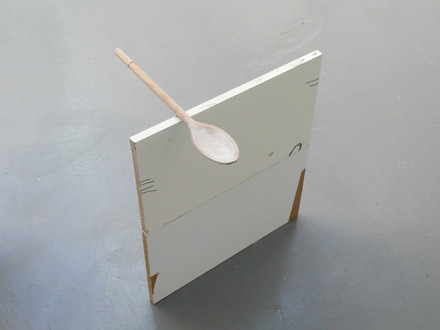 The collective exhibition “You don’t need eyes to see” brings together works by four young artists who give priority to an analytical approach in their plastic research. Placing form and idea in movement, these artists announce a return to the Theoretical combined with economy of plastic effects, and are distinguished by a pronounced liking for ambiguity, illusion and metamorphosis. Vision is here put to the test, and the viewer’s eye is often deliberately distracted by a clever dialectic and didactic play between appearance and reality, concept and affect, seeing and knowing, or again matter and idea. Here there is no linear discourse, each work sketches vanishing points which make the meaning fluctuating, creating regions of profound imperceptibility where the viewer struggles to find an equilibrium.
French artist Benoît Maire explores our affective relationship with forms, sounding the depths of the visible by means of a self-reflective art that disturbs the customary language/image equation. His works can be understood as the modelling of ideas nourished by numerous artistic, literary and mythological references, as is the case for “Tête de Méduse” (Medusa’s Head): by revisiting the myth of Medusa, the artist opens a blind dialogue between a sculpture and a painting, establishing a spatial configuration which updates a string of references to art, history, philosophy and psychoanalysis, but also to the viewer’s personal mythology. The Milanese artist Luca Francesconi also bases his reflection on a dialectic of the view, probing the relationships between man and matter, controlled human action and the more unpredictable action of nature. His compositions reveal a certain form of mysticism, translating a sentimental relationship with organic matter that he processes, crafts and models like a primitive language. Here, art becomes an exercise in reading, writing and questioning in which the form/work of art takes itself as subject. Iranian artist Navid Nuur is concerned with dissecting the mechanisms of perception, creating new links between language and object, showing a taste for rudimentary compositions of ambiguous meaning, what he calls “interimoduls”.
The work of these artists celebrates doubt and uncertainty, giving priority to an anti-spectacular style involving sparing, rational use of matter. It is in this discontinuous time and space, punctuated by a flood of references, that meaning spreads, is disseminated, moves, loses itself and loses us. Because here, ideas are the objects, and the visible is therefore more resistant to the viewer, sometimes even becoming completely hermetic, as in the case of the young English artist Matthew Smith, whose often disembodied forms take meaning as far distraction and undifferentiation. Renaud Jerez also makes light of platitudes and standardized patterns of perception; his interest lies in bringing into relation with one another disparate objects, that then enter into negotiations on both the spatial and conceptual levels. His enigmatic installations, always involving a distanciated affect, constantly create semantic distortions and shifts of meaning, reflecting the stratified nature of our mental and visual environments.
Trompe-l’oeil trickery and anamorphic modulations leave our desire for reality unsatisfied, constantly postponed, suspended. The works presented at this exhibition should therefore be viewed from many angles, making a reflexive effort to go beyond the mere presence of the object and reconcile the numerous possible viewpoints and interpretations.
Benoît Maire’s work is currently exhibited at FRAC Aquitaine until the 12th of September. It is also on show at the Palais de Tokyo until the 5th of September as part of the “Dynasty” exhibition. As for Luca Francesconi, his exhibition at the Sandreto Foundation in Turin is ending; Navid Nuur is currently exhibited in the Martin Van Zomeren Gallery (Amsterdam) and Plan B Gallery (Cluj, Romania), and also in the Martha Herford Museum (Germany). Matthew Smith recently held a personal exhibition in the Limoncello Gallery in London and Renaud Jerez was shown at the latest Contemporary Art Fair in Montrouge.