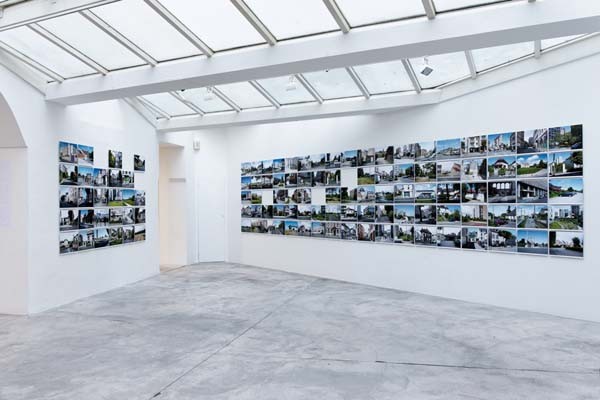 Glooscap, we thought, was made to proliferate; to become detailed and to spread out; re-exhibiting this fictitious and entirely plausible city would be like updating the encyclopaedia of a subject in a state of constant renewal. We would have visited Glooscap II, then Glooscap III, IV, V_... If this is not how things turned out, it is because _Glooscap is not what it seems, which is to say a fictitious city, an imaginary city whose reality would increase with its research and literature.
Glooscap’_s logic is not fictional: it does not tend, like all fiction secretly desires, to draw closer asymptotically to a possible reality (with the barely concealed aim of taking its place). _Glooscap’_s logic is prototypical and subtractive: what minimum of reality and fiction do I need to construct a false-true city, one that works: a true prototype of an average city? Fiction is in fact just a means of not completing reality and it only operates in small doses. Glooscap’_s force derives from this delicate ‘in-between’, the in-between of a project on the point of being realised (Voiture Meunier-Béraud), or that is only realised when becoming unreal (Plan Voisin de Paris). We now understand why there will never be Glooscap II, III or IV and that we can merely repeat Glooscap, in other words re-exhibit it exactly. Or nearly. Because, although it is forbidden to add, we can still subtract: establish a distance, objectify, as was the case at La force de l’art 02 exhibition, where the original Glooscap exhibition was presented like a work of art, rendered a museum object by its showcases; or, as is the case here, in the Galerie Vallois’s Project Room, where a room from the original 1994 exhibition (which took place in the same gallery) is reproduced exactly but in the form of a series of ‘phantoms’, trompe-l’oeil reproductions of ‘false’ Glooscap ‘documents’: plans, maps, sketches, oil paintings and watercolours, fresco studies, etc. The subtractive distance previously established by the showcases here operates through the rough digitisation, which allows Glooscap to pursue an existence that tends towards abstraction and erasure.
An operation that we find back to front in the ‘Indian wall’ that, in the main gallery, replicates a part of the mural installation Alain Bublex presented in the Paris-Delhi-Bombay exhibition at the Centre Georges Pompidou under the title Contribution #2 – Delhi Cold Storage, notes et hypothèses (de travail). Photographs of New Delhi clearly grouped together according to kinds of objects or landscapes – building façades, tangles of electrical wires, flower pots, ventilation pipes, museum spaces, vehicles, etc. – and whose first (aesthetic) impression fades relatively quickly.
The second impression: an amused and admiring inventory of urban constructivism; some photographs are accompanied by a drawing that elucidates the apparently impossible functioning of the represented objects (for example, a hybrid of a wheelbarrow, bike and scooter that nevertheless works).
The third – which passes by the photograph of two metallic arches in the middle of a wasteland accompanied by a drawing of the complete, reconstituted object: a two-person storm tent – makes us say that reality is dysfunctional and therefore mixed, full of prototypes, fictions and unfulfilled ideals; and that one of the roles of the artist could be to (re)exhibit the incompleteness.
To ‘incomplete’ reality (a second time). It seems to us this is what Alain Bublex does and we could hence generalise: each exhibition incompletes the one prior and here, moreover, the first.