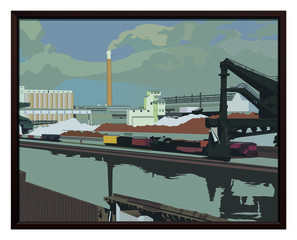 Organising an exhibition can be seen as testing out a hypothesis which can only be presented – and defended – by establishing a convincing relationship between the works it has recourse to. A hypothesis, then, cannot be a clearly formulated theory demanding verification, and even less so a discourse whose lofty sentences are appropriately interconnected by the exhibits. It is either a promising idea still lacking a concept, an intuitive sense of a novel and hopefully fruitful interrelationship, or a group of works one would like to bring together to observe how this juxtaposition changes them.

A dual hypothesis, then: as to what would be (should be?) an exhibition and as to what an exhibition actually does. Since the first part can’t be gone into here, let’s take a look at the second, with Alain Bublexproposing, in backdrop_* (_*arrière-plan*), to test out a hypothesis in the way mentioned above. To put it briefly: ‘The creation of a «national» political and cultural space most often goes hand in hand with a trend towards representation of its landscapes.’ Or in other words, as soon as a people endows itself with a common future (and invents for itself a shared past), it feels the need to portray what surrounds it and what has preceded it. It then does two things that are only seemingly contradictory: it portrays the irreducible strangeness of these landscapes while at the same time recognising them as its own. Thus a landscape – whether painted or natural – is not solely a visual transformation of the natural environment; it is also an assertion of the strangeness of what is there. One of the works Bublex has opted for in trompe l’oeil form is a landscape by Albert Bierstadt, a painter of the American West and its wilderness. Interestingly, it was Bierstadt’s paintings that led Congress to pass the Yellowstone Park Bill in 1872 and so create history’s first national park. Bublex is not trying to say that a pictorial space is also a political space – in itself a truism – but rather that the establishment of a country as a political space involves that country’s representation of landscape. And this representation changes with time: the time of history and the time of art. After Bierstadt, backdrop (arriére-plan) presents pictures by Charles Sheeler and Morris Louis, offering a curious history of American painting fromwilderness to Abstract Expressionism. This placing of a Morris Louis picture beside an industrial landscape by Sheeler the modernist speaks eloquently of the intuitive aspect of the hypothesis. The first major style produced by American painting, Abstract Expressionism is, as much as Bierstadt’s Rocky Mountains, part of the cultural landscape in question; and a trained eye will not fail to detect in the overlaid strips of colour of Louis ‘veils’, diluted to the point of translucency, the distant heritage of Bierstadt’s spectral backdrops: trees and mountains given a strangely ghostly look by the scorching sun rising over his landscapes.

There remains, however, the question of how the hypothesis is actually put to work: of the ‘rigging’ (as Bublex calls it) which underpins its structuring, which renders visible an exhibition whose construction has been halted – abandoned or gone to ruin – and which thus refers all the exhibits back to the contingency of their finish. We must not conclude, though, that all landscape is ruin; simply, rather, that it captures and as a result ultimately effaces the strangeness of what is there. ‘Rigging’ – also to be taken here in its nautical sense – consists in making discernible the activities that art presupposes and often conceals; which is also the message conveyed in their own way by the original works Bublex has dotted throughout backdrop (arriére-plan): landscape photographs in which a part – a freeway, Mount Fuji, etc. – is reproduced by vectorial drawing, as additions whose obviousness (they in no way interfere with the image) testifies to the familiar artificiality of our surroundings.

Alain Bublex has never stopped making landscapes in a country that has produced none since the end of the Ancien Régime (with some notable exceptions: the ghost of Albert Marquet haunts the exhibition) Republican France took shape without offering any image of itself; which is probably why, today, we find it so hard to look at her without nostalgia.