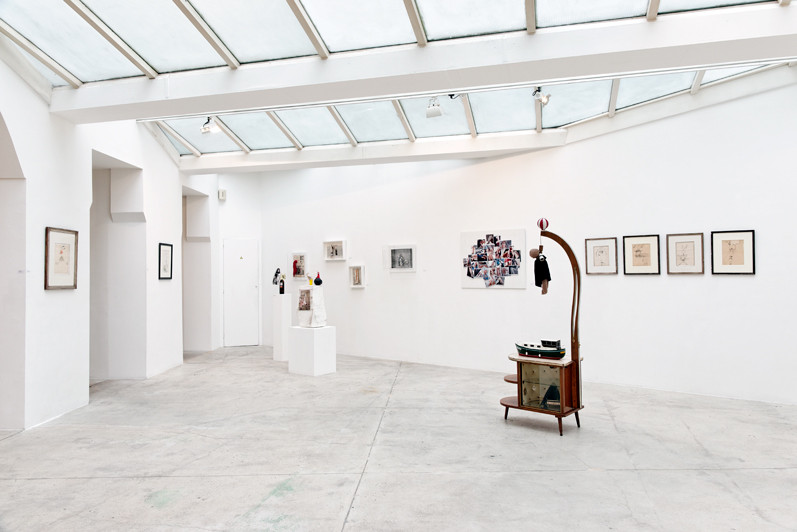 « Exquisite Corpse », sequel to the exhibition « Cadavre Exquis » shown at the Galerie Georges-Philippe & Nathalie Vallois in 2003, offers a selection of works inspired by the famous Surrealist game invented in Paris around 1925, in a house rue du Château where Marcel Duhamel, Jacques Prévert and Yves Tanguy used to meet. Other participants, famous or unknown, also joined them over time.

The first attempt at this poetic and playful exercise was the phrase which consecrated the game, « Le cadavre – exquis – boira – le vin – nouveau ». However, it quickly became an experiment allowing the artist to explore the functioning of thought outside the realm of Reason. In doing so, the Surrealists both renewed and liberated the nature and practice of drawing itself.

The exhibition is twofold: it presents an exceptional ensemble of Surrealist exquisite corpses all produced around the 1930s by André Breton, Oscar Dominguez, Paul Éluard, Georges & Germaine Hugnet, Valentine Hugo, René Magritte, André Masson, Paul Nougé, Man Ray, Yves & Jeannette Tanguy, and some anonymous; facing them, works from contemporary artists who embody the same spirit of transgression and freedom. Each work from the exhibition plays on unexpected juxtapositions and unbridled narrations.

In the tradition of exquisite corpses, Gilles Barbier presents a drawing-hommage to « L’OEil cacodylate », a painting by Francis Picabia composed of autographs and graffitis from his friends. In Barbier’s version, the work is subject to social and judicial bodies that have left their administrative stamps on it, thus questioning the value of signature.

Vedovamazzei, a duet formed by Italian artists Stella Scalla and Simeone Crispino, produces since 1991 four-handed works that take on a collaborative approach, such as the portrait of the icon « Diana Vreeland ». The sculpture « A crime is a crime is a », an explicit reference to Gertrude Stein’s famous poem Rose is « a rose is a rose », questions the loss of identity and the depersonalisation of the author.

This notion of duality also comes out of « Films Portraits » and « Masks » by John Stezaker. This artist works on the anonymous circulation of images and produces juxtapositions with found and collected images from popular culture (postcards, actors portraits, or advertisements). From this collusion of references emerges a new terrain for strange and unexpected significations.

Hans-Peter Feldmann is also a collector, archivist and assembler, and in his work, the woman’s image is paramount. Combining the serial component of conceptual art with the use of popular culture images, the assemblage of photographs in « Legs » works like an inventory of women’s legs similar to an archaeological documentation. Much like a fetishist, he plays with a pair of golden shoes with the soles covered with drawing pins as the representation of an idealised and ambivalent femininity.

Théo Mercier seems to invert perspectives and presents « exquisite cadavers », hybrid staging evoking a macabre dance of desire. Images and references are combined and juxtaposed, and oscillate between contemporary and archaic, kitsch and ethnography, such as his collage with pornographic appearance and sculpture created especially for the exhibition.

Keith Tyson’s work functions like a laboratory from which possibilities and creations seem random and infinite. Whereas the « Studio Wall Drawings » form a kind of Borgès-like diary where forms, ideas and writings are superimposed, one of the techniques used in his new series consists in painting over already existing works. In « Locus Solus », borrowing a title from Roussel, the superposition of topics and techniques from different time periods generates a mysterious work where motifs end up woven in a « single location ».

Metaphors and random associations can also be found in Adam Janes’ drawings/collages. Each presents a fragmented world, a whirlwind of signs combining hybrid influences and techniques, which, from drawing to drawing, are integrated in a great circular and organic flux.

Pauline Curnier Jardin is a smooth and cunning storyteller who finds her inspiration in a fantastical universe to produce what she calls « narrative patch-ups », a technique similar to patchwork. « Le Salon d’Alone » is a collection of objects telling incredible stories which sometimes escap into a sculpture such as « La Poire des Poils ». Elements of one piece become characters for another, and even the titles (« Un tableau de Salvador Dalí repeint regardé par une fourmilière » or « Un tableau-oeil regardé par un sapin ») take on the absurd and the epic, and seem to be constructed as exquisite corpses themselves.

Much like a « chance encounter of a sewing machine and an umbrella on a dissection table », to use Lautréamont’s words, John Bock’s collages incorporate disparate elements which could also he found in his performances, such as a bottle of wine, a sock, a milk carton and a picture of a nude woman. These hazardous meetings of artefacts, in both his collages and sculptures, become the terrain for an absurd game, which triggers unexpected experiences and blurs the frontiers between disciplines.

Finally, « Le Château de Gilles de Rais » is a shooting-painting by Niki de Saint Phalle particularly rich in collisions. One is the relief itself, an encounter between a world of childhood relics, and a criminal and paternal figure, Bluebeard. The other one is the action of shooting with a rifle, which makes the painting bleed. By manipulating found objects assembled in relief-paintings, she confronts aspects of real and intimate life with an actual execution of the painting as the target.

This heritage from the process of the « rotating corpse », freed from its historical tradition, carries on in some contemporary artistic practices which render the Surrealist preoccupations long-lasting: freedom, absence of hierarchy, diversity of input and fragmentation of the image.
www.galerie-vallois.com