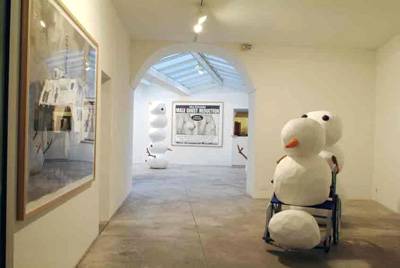 The unfortunate snowman, the proverbial figure of disastrous Christmases thanks to ridiculous and childish customs and beliefs, is the unifying figure that makes up an album of stylised images proposed by Olav Westphalen. The four imposing winter sculptures proposed by the artist put forward several hypotheses. I will reassure you immediately. None of them would seriously survive on an icy road...
Nevertheless, I cannot help thinking of the initial, global and fictional, iconographic research to create an Encyclopaedia of Snowmen. This would not be a human publication dedicated to micro-details in a macro-climate, but rather a comprehensive survey of a specific world, seen from within; that of the snowmen. Let us imagine this parallel world, this empire of the snowmen, which only partly, and even then accidentally, communicate with the outside world and enter into the history of humanity. Imagine that at the heart of this reality an encyclopaedic dream is born, one of creating and scientifically describing,
with the coldness and patience that characterise this strange climate, the history, geography, religion, physical nature, literature, sexuality, humour and economy of this parallel world, which is at once, playful, caricature, crystalline, folkloric and wintry. The title of this encyclopaedia would obviously be The Big White. In the «science» volume, a chapter would be devoted to the Theory of Chaos. We remark that if the silhouettes of the snowmen prove to be simple, over-stylised, compatible with Euclidian physics then by contrast the crystals of snow and ice are an uncontrollable phenomena, asserting their physical reality through their fractured dimension and non-linear equations. A footnote would send the reader to the «arts» volume: to explain that in this domain, as well, form is only one element, equally poor as obvious, and that the essence of complexity is to be sought in the hidden depth of Matter, or in the impassable maze of ideas.
Jean-Yves Jouannais