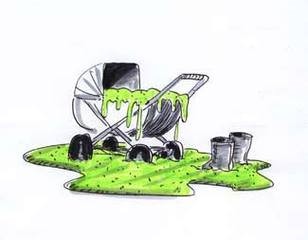 Michael Jackson and his three diaphanous children; Doctor Antinori whose experiments are enabling women to give birth at sixty; the mother of octuplets in Los Angeles; and twins born of different fathers: never have maternity and medically assisted procreation generated so many modern myths out of research sometimes pushed to extremes. The experiments are big business now and the operational fuel – sperm – has become a treasured item. And a luxury one as well, given the vertiginous drop in quality it’s undergone in our supposedly advanced Western societies. Olav Westphalen has looked into the value of this «merchandise» and the legal and medical obstacles to obtaining the precious bodily fluid in some countries, notably France. This «natural» product has become a cultural commodity and a financial and moral issue of the first order; but Westphalen’s concern is less with provoking political debate than with coming to grips with the mechanisms for defining and promoting raw materials.


Making formal play with an entrepreneurial strategy, the artist is turning the Galerie G-P & N Vallois into a cooperative, a sperm bank – for deposits and withdrawals – signified by communication equipment and a minimal sculpture:
a refrigerator with a content as coveted as a river of diamonds, an altar containing a relic with a whiff of scandal about its mix of sex juice and promises of happiness. Ah, when the poetics of maternity starts flirting with medical reality, secrecy and financial wheeling and dealing! It’s illegal to sell sperm, but what’s the situation if it’s sold in the form of a sculpture? And as if to express the tension between the «priorities», the exhibition also features illustrated advertisements for jewellery and precious stones. Power, potency, solitary pleasure and an overt display of virility: mixing bling, showing-off and the well-guarded secret of an assisted conception, FerCoTM delights in the cultivation of antinomies.

Out of this project also emerges a series of sculptures and drawings with no illustrative function at all. As so often in Westphalen’s work, here we find him crossing swords with all sorts of Art History references and masters. Kleenex borrows equally from the range of paper tissues and Minimalist aesthetics for its absorption of the modular into a wooden monolith. Drums, a monstrous hybrid resulting from the union of a priapic fountain of youth and a totem pole commemorating a catastrophic oil slick, combines ultra-abundance and exhaustion of fossil energy resources, waste, overconsumption and rarity. B-Movie, its innocent pram coated with some gooey substance, suggests a bad screenplay, a kind of distant, degenerate relative of The Exorcist that hints at fearful, quasi-cannibalistic offspring.

FerCoTM is not a business, but a cooperative which in this instance puts the emphasis more on the «health» image of agriculture, reproduction and procreation – of breeding, in other words – than on a clinical context of genetic manipulation.
www.galerie-vallois.com