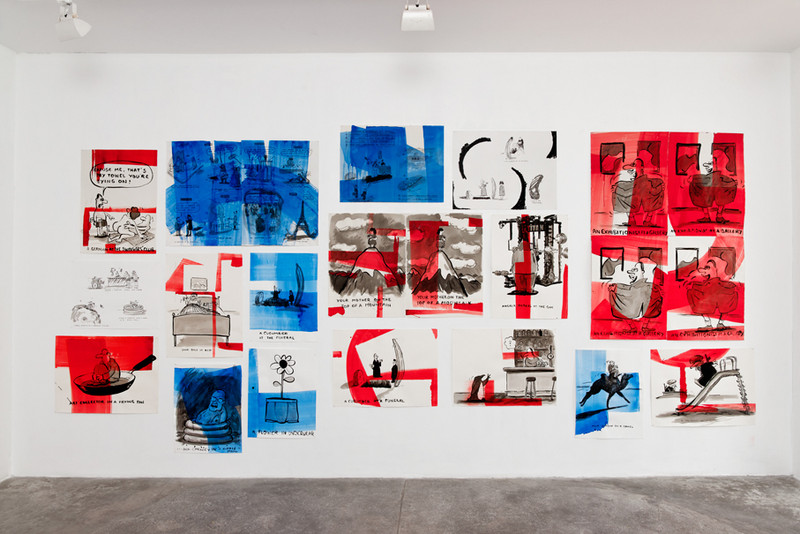 The cartoonist’s “gag-master,” an aleatoric device dating back to at least the 1930s, allows the user to compute tens of thousands of unique joke premises simply by spinning three concentric wheels. Olav Westphalen has developed a substantial body of drawings based on this classic tool of low-brow entertainment as well as on other mechanical systems. (only a selection of this obsessive project is on view here).

At times, the results of his method are what one would expect: high art translations of low art craft, in this case the nondescript language of mainstream cartoons. Clearly, the quick ink lines, the ubiquitous bubble noses and all the other comical shortcuts are as fascinating to the artist as they are unnerving. But these drawings go beyond the negotiation of the hi-low divide, they manage to outgrow their their chummy roots and become that taboo thing: autonomous expressions, they acquire a strange kind of poetry, corrupted and ridiculous, yet not without beauty.

The drawings are frequently punctured by painterly gestures apparently culled from our collective memory of those conveyor-belt productions of academic abstraction from earlier, simpler decades (and which lately have been reappearing in the galleries). On second look you notice that the spill-over, the drips and drop-cloth stains created by these painterly commonplaces, are re-used as forms in their own right, thus obliterating the distinction between product and waste, artistic inspiration and mechanical transport of paint.
Another group of images jettisons the hard-line cartoon esthetic in favor of realistic brush drawings. In these drawings with titles such as “Carla Bruni in a submarine using animals and humans for unfit tasks”, the modular components of a comical situation are juxtaposed in a straight, deadpan manner. Here the joke, if there is one, takes shape entirely in the viewers’ mind. But again, there may not be a joke.
Olav Westphalen works with a range of materials and methods: drawing, sculpture, performance. He has also worked as a commercial cartoonist within the art world for over a decade now.

To some extent this entire project is a revisiting of Richard Prince’s obsession with low-brow comedy, albeit a complex one. Appropriation is no longer at issue when the artist is appropriating from his own cartoonist self. Instead of stating once again the crisis of authorship, originality etc. “A junkie in the forest” actually re-admits a notion of “wit” and “idea” even of “voice.” To be sure, this is a broken, refracted and bathetic voice. But still. It is a show about industry.
When Seurat, who then was an office worker by day, was asked how he was able to paint his huge canvasses in his kitchen by the light of a single candle, his reply was: C’est ma méthode. (It’s all in the method).