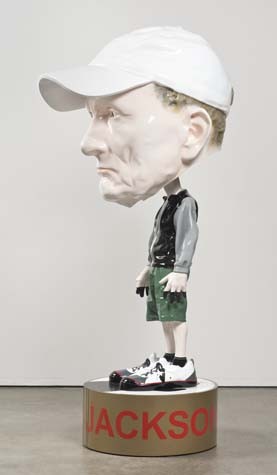 Richard Jackson is one of the main figures in American Contemporary Art since the 1970s. Influenced by Abstract Expressionism and Action Painting, Richard Jackson has always sought the performative dimension of painting and to stretch its potentialities, especially by turning its technical conventions upside down. For the artist paint is not a tool to create a representational image but is used as an omnipresent liquid that spurts, spouts and splashes on the surface of his sculptures and installations.

For Dark Rooms, his fourth solo show at the Gallery, the artist transforms the entire space in a dark room, the perfect setting for his most recent works. Contrary to his last two shows which were focused on monumental installations (the Dining Room and the Cra-Z Boy, part of the FNAC collections today) – and although we find a Dark Room invading the entire Project Room – this new project presents an unprecedented ensemble of sculptures in a more “family” format, but nonetheless “invading” in terms of their topic and plastic strength, borrowing multiple references from American popular culture.

With Bobble Head, one of which was shown on our booth at the FIAC as a “foretaste”, Richard Jackson is openly criticising, with humour and wit, the myth of the artistic genius and the figure of the artist as a contemporary symbol of culture.

In this self-portrait, he parodies himself as a figurine whose head (wearing his signature cap) bobs as these kitsch gadgets adorning some cars’ rear decks. This sulky head, excessively big on a particularly frail body, evokes the deadpan humour of a Buster Keaton.

Opposite this sculpture, the artist also represents himself but this time under a black paint mask: Washing Machine (2014) also plays on the self-portrait exercise, under the traits of an actor with a blackface makeup. Placed on a washing machine (washing whiter than white?!), this gigantic portrait of the artist stigmatises this popular theatrical makeup, a tradition found in minstrel shows of the 19th Century and again in silent films, in which white actors blackened their face with soot. A little bit further, blackface and smileyface work as a diptych; the two figures present both sides of the same character.

Also wearing the same mask, Don King Head (2013)draws up a burlesque portrait of the scandalous promoter of professional boxing who notably organised The Rumble in the jungle, the legendary fight between Mohammed Ali (a.k.a. Cassius Clay) and George Foreman in Zaire. Set on a compressor with paint already splattered on it, the portrait of Don King refers directly to the figure of the clown, underlining the grotesque aspect of the disheveled character. The boxing pattern is also present with Boxing Gloves, a pair of which comes alive in a tendentious manner, embodied in a little girl wearing clogs, also covered in paint.

The show will reveal many more surprises, including the sculpture Deer and Skeleton, where a skeleton is strangling a deer, reminding us of the cartoonesque environment of Tex Avery. Richard Jackson draws from the roots of American popular entertainment and revives a certain Hollywood golden age born with the advent of talking films (the actor Al Johnson appears in 1927 with a blackface mask in the first of the “talkies”, The Jazz Singer), and the birth of Technicolor which gave its first colours to American cinema.

This cinematographic ambiance is highlighted by a new Wall Painting deployed on the black walls of the gallery and enhancing the corrosive humour of the other works.

Finally, the Project Room, entirely painted in red from bottom to top, is dedicated to the Dark Room which presents itself as a gigantic box, reminiscent of the chambre noire. This cubic space (with its own black and white checked pattern, entirely dark and only lit with a red light) is closed, suggesting the room used to develop photographs as well as a cinema décor (thanks to a railing system, the box actually revolves on itself). Following a unique performative action, the “activation” of the work, which is equipped with a network of tubes and hoses, will lead to paint eruptions which will submerge the work and its environment.

Richard Jackson was born in 1939 in Sacramento, California. He obtained international recognition thanks to the presentation of his installations at the Menil Collection in Houston, in 1988, followed by the exhibition Helter Skelter at the Los Angeles Museum of Contemporary Art in 1992. His work has since been presented in numerous group shows, among which the 48th Venice Biennale in 1999, the Lyon Biennale curated by Harald Szeemann in 1997, Iconoclash (2002) at the ZKM, Karlsruhe, Dionysiac (2005) at the Centre Pompidou, and Collection on Display (2014) at the Migros Museum für Gegenwartskunst, Zurich. His last solo project CAR WASH was shown at the CAB Art Center in Brussels in 2014.

An unprecedented three-part travelling retrospective, Ain’t Painting a Pain, was shown at the Orange County Museum of Art, Newport Beach in 2013, at the Museum Villa Stuck in Munich, and ending this Summer at the S.M.A.K., Ghent in 2014. It was accompanied by an exceptional catalogue with texts by Philippe Van Cauteren, Dennis Szakacs, John C. Welchman, Michael Darling, Jeffrey Weiss and
Hans Ulrich Obrist.
www.galerie-vallois.com