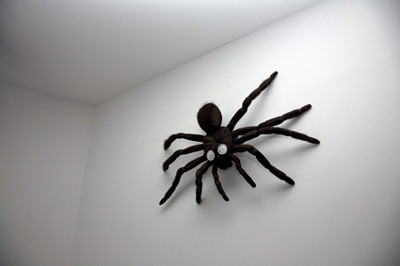 You see a man walking along a wall, while another man follows him on the ground – but walking backwards. Then you see another man, in another place, gesticulating alone in a vacant lot. It’s dark and he seems to be addressing an audience that’s absent, or out of shot. From time to time to time he shines a flashlight on the dense proliferation of marks and tracks around him, as if deciphering or translating them aloud for an invisible audience. The textured slickness of the examined ground evokes the skin of the toad tracked by the beam of another flashlight in another sequence of the same video, Hit the Ground Running (2009). These sequences come together to form an indeterminate whole. They speak, but like a sentence interrupted and left
hanging, one whose interruption the viewer has to patch or decipher on his own.
Constructed out of sequences filmed in different countries – Japan, China, United States, France, etc. – this video is what you might call the kernel of the upcoming exhibition at Galerie Georges-Philippe & Nathalie Vallois. Not that it supersedes the remaining pieces in the show, but rather that different aspects of its structure and mode of interaction with the viewer are reflected within these other works. One of the triggers for Yassef’s project was the urge to articulate or communicate something close to dread: a dread without fright or terror (or even horror), the kind that seizes one when one is faced with an unknown, or the unknown, or even the unknowable, that “non-savoir” (non-knowledge) which George Bataille said always made him laugh to tears. A series of drawings of a tarantula, «commissioned» by the artist from her mother, testifies to the mix of dread and fascination which the latter felt for the insect in question. A spider-web map decorated with multicoloured markings is traced on a magnetised wall. One sees in it a reflection of the chaotic yet restricted path followed by the viewer, with the coloured dots indicating his points of entry, arrest, and departure.
Like Yassef’s other works, those in this exhibition seem driven by a logic that is
simultaneously familiar and perplexing, as when the familiar gestures of a
long-lost friend or relative, returning from distant parts, suddenly seem inflected by the ghostly shadings of other, unimaginably alien gestures. Walter Benjamin once said that you could read Kafka’s animal stories for quite a while without realizing that they are not about human beings at all. Similarly we can contemplate Virginie Yassef’s works at length before understanding that they come from somewhere else: an elsewhere like the obverse image or concealed potentiality of that contemporary reality whose brief sparks of magic she so meticulously captures and tweaks in her multifaceted practice.
(Julien Bismuth)