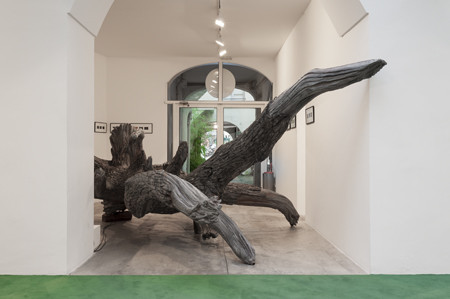 A country road. A tree
Evening.
Estragon, sitting on a low mound, is trying to take off his boot. He pulls at it with both hands, panting.
He gives up, exhausted, rests, tries again.
As before.
Enter Vladimir.

These lines introducing the first scene of Waiting for Godot (1952) by Samuel Beckett could almost be à propos to accompany this proposition by Virginie Yassef. They train our imaginary and already immerse us in a kind of theatre of the absurd. Indeed, the stroll at Galerie Vallois starts with a tree trunk, the very same one that obstructed the rue des Cascades in Ménilmontant during this year’s Nuit Blanche event in Paris. Confusion was at its height around L’Objet du doute (2013) (The Object of doubt). « Is it marble? », one could hear one asking. Not far, in the Tuileries gardens, L’Arbre à voyelles (The vowels tree) by Giuseppe Penone triggers without a doubt similar poetic comments. Then suddenly, Yassef’s tree, like a real fictional character, stirs. As if drawing its last breath...

Around this trap is a clearing were several works are presented, extending the recent exhibitions at La Galerie in Noisy-le-Sec (un mur de sable vient de tomber, December 2012 to February 2013) and at La Ferme du Buisson in Noisiel (Le Signe singe with Julien Bismuth, April to October 2013), complimented by a choice of Scénarios fantômes (Ghost scenarii), a series of enigmatic photographs which Yassef has been developing since 2003. The latter function as would a narrative altar in Italian classical painting. Inspired, among others, by Investigations of a dog (1922) by Franz Kafka, the 2012 installation in Noisy-le-Sec, on n'a jamais vu de chien faire, de propos délibéré, l'échange d'un os avec un autre chien, was the beginning of a deeper commitment towards staging and scenography of the kind found in theatre. It was the decor for a mutant show during which, between Noisy and Noisiel, a child changed into a dog. One of the elements is turned here into a peacock tail: this motorised deployment exaggerates the seductive and exceptional display of this animal.

In this same universe, which reminds us of the ones staged by Pierre Huyghe and Philippe Parreno, the viewer is invited to listen to a conversation, worthy of Beckett’s play or the exchanges between dogs in Kafka. Questions on human behaviour are asked by a few fake stones and logs dispersed here and there. Yassef invites us to “attend sculptures” which are “on the verge of talking”. In October 2013, the nature of the Parc des Buttes-Chaumont and its famous reproductions using trompe-l’oeil in concrete led the artist to offer a living experience in two parts around an empty base for which she learned to avoid classical constraints. From resin to polystyrene and painted cardboard, the trick materials are far from traditional bronze and closer to Disney, theatre, or science fiction films. Orality, sounds, movement and tactile attraction to elucidate these mysterious illusions are all at play to amplify the potential of awe.

Emilie Renard entitled her interview of Virginie Yassef “To be continued”. Indeed.

Les Recherches d'un chien, a project by Virginie Yassef for LE SOCLE, on October 18th-19th 2013. LE SOCLE is a programme initiated by the collective On The Roof with the Festival Les Uns Chez Les Autres by the city council of the 19th arrondissement in Paris.
www.galerie-vallois.com