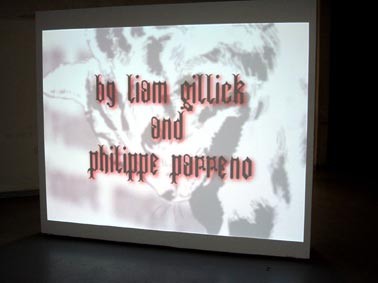 The relationship between law and creativity attempt to critique Liam Gillick and Philippe Parreno in this project. The scenario has as a starting point the old story of the cat and the mouse chasing as it is presented in the cartoons films.

The artists refer to their work: "Our scenario details the attempted overkill of a potential victim, who offers violent yet always inconclusive retaliation. Our take on the story begins with the realization that the cat has finally killed the mouse, leaving us in a gap akin to that between the Second World War and the Cold War, or between the Cold War and the so-called War on Terror...

The series is a de-abstraction of relationships. The values of the genre have been rejected by modern culture in favour of less violent cartoons. Yet they are still shown every day on cable TV. Cartoons tend to simplify notions of cause and effect, crime and punishment, the vigilante and the victim, the notion of the pre-emptive strike and what it feels like to have your guts pulled out of your mouth...

It would seem as if there were a number of potential complications in the production of the work. The drunken condition under which the initial script was written, the parasitical relationship to a film company, the use of the font designed for a specific use being reused and the potential complications of the various music clips. However, none of these aspects of the project are straightforward or didactic.
The final effect is an excess of questions, quotation and potentialities rather than a clear-cut display of legalistic dilemmas. The whole project is rooted in overstatement and subtlety at the same time which echoes the complexities of our time. It both avoids and sidesteps the meta-discourse of the conference project, while exposing new potential pitfalls at every step."