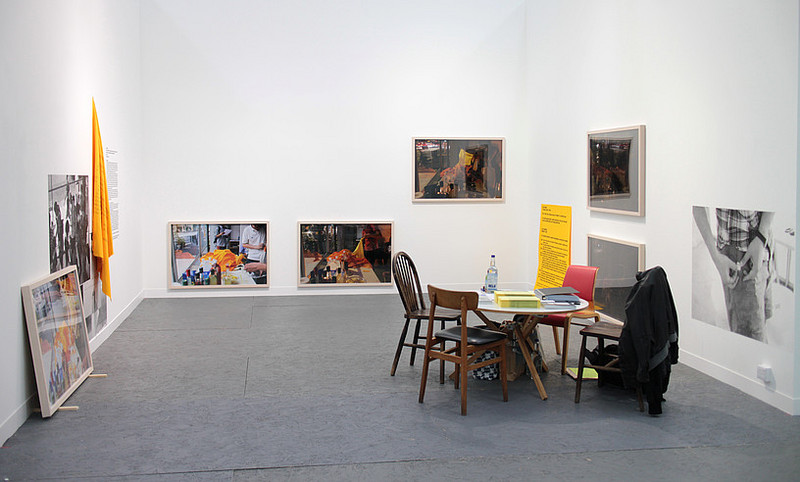 Positions is a new exhibition format that sets a series of projects in dialogue with one another in the ten galleries of the museum's old building. With each artist presenting a significant body of work, many produced for the exhibition and others developed through collaborations with art organisations throughout the world, Positions explores different tones of contemporary artistic voices.

The five distinct presentations examine how we position ourselves in the world today – often making visible frameworks, subjects and ideas that are felt but not seen. The exhibition unfolds as a conversation between a series of installations, films and architectural interventions that move between different geographical and political contexts and invite us to consider how agency - collective or individual - is both granted and taken away.
Positions 2014 includes:
- Lawrence Abu Hamdan;
- Céline Condorelli;
- Bouchra Khalili;
- Charles van Otterdijk;
- Koki Tanaka.
- Lawrence Abu Hamdan (1985, Jordan), Tape Echo, 2013-2014
Lawrence Abu Hamdan will present Tape Echo, co-commissioned with Beirut in Cairo and including a new video work produced for Positions. With Tape Echo Abu Hamdan proposes a series of methods for documenting and intervening within of Cairo's dense audio urbanity, looking at how voices are distributed and hearing is damaged within of the city's rapidly changing sonic conditions.
- Céline Condorelli (1974, France), The Company She Keeps, 2014
Céline Condorelli’s work is concerned with how all human action takes place amidst what she has termed ‘support structures’ – whether emotional, legal or physical – which are mostly taken for granted, and therefore seem invisible. The Company She Keeps presents a series of new objects, installations and interventions in the galleries that develop from her ongoing engagement with friendship as a condition for working and living together. At the centre of the installation is the publication The Company She Keeps (published by Book Works, Chisenhale Gallery and Van Abbemuseum) which includes a series of conversations between the artist and friends on the philosophy, politics and history of friendship.
- Bouchra Khalili (1975, Morocco), The Speeches Series, video trilogy, 2012-13
French-Moroccan artist Bouchra Khalili will present the three-part work The Speeches Series – shown together for the first time in Positions. The Speeches Series is built around three chapters, each comprised of five speeches by migrants that Khalili has collaborated closely with in Paris, Genoa and New York and that focuses respectively on mother tongues and dialects, citizenship, and working class.
- Charles van Otterdijk (1976, the Netherlands), Double Centre, 2013-14
Charles van Otterdijk’s project Double Centre is based around two locations on the Polish-German border. Through photographs, research material and a highly evocative installation Double Centre addresses the culture of surveillance and the way in which information is controlled and mediated – by the artist himself and, by inference, to society at large. First presented in Stroom Den Haag (2013) this second ‘Situation Report’ from these sites includes new objects produced for Positions and new research material. The publication Double Centre was published by Book Works, Van Abbemuseum and Stroom Den Haag in the fall of 2013
- Koki Tanaka (1975, Japan), Precarious Tasks, 2012 - ongoing
Koki Tanaka’s Precarious Tasks, developed over the past few years in cities throughout the world, are humble acts of collectivity conceived in the immediate aftermath of the Tohoku earthquake in Japan and the resulting Fukushima disaster. In Positions they are presented through an ambitious, architectural installation with documentation, statements and ephemera from the tasks. Tanaka will carry out two new tasks in Eindhoven, commissioned for Positions.
The projects were realised in collaboration with: Beirut, Cairo; Book Works, London; Chisenhale Gallery, London; Museum as Hub; Pérez Art Museum, Miami; Stroom Den Haag.
www.vanabbemuseum.nl