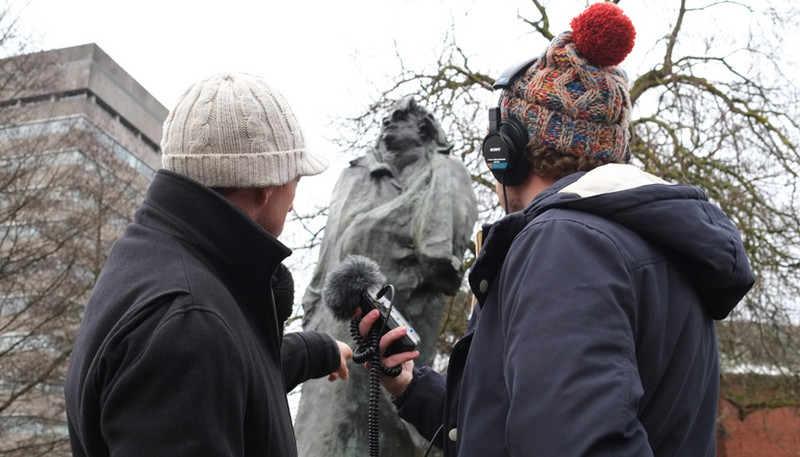 Auguste Rodin’s statue of Honoré de Balzac (1898) was bought by the city of Eindhoven in 1965 and has stood in the garden of the Van Abbemuseum for almost half a century. The sculpture has gradually become at one with its location in the city of Eindhoven. But who still looks at an object that is now such a natural-seeming part of its surroundings? Starting in February 2014, Balzac will figure in Het Oog (The Eye) in the Van Abbemuseum, as a special guest in an installation by the artist Arnoud Holleman (Haarlem, 1964). In this temporary presentation, the statue is placed on a rotating platform, inviting Balzac and the public to look at each other anew.
A special radio programme – www.radiobalzac.nl - will report on this encounter. In this situation Rodin’s Balzac will be a discussion partner in thinking through the role and place of the artist, comparing his time with today. Radio Balzac will also be played continuously in Het Oog.
For six months Balzac is a guest in the museum. He will look at us, and we will look at him. This meeting invites us to discuss the hidden histories and unexplored meanings of Rodin’s sculpture and its status as a public artwork then and now. A red thread in this conversation will be ‘the myth of the artist’, also an important topic in Arnoud Holleman’s publication Ik en Rodin (Me and Rodin) which will be launched at the end of the project.
The project Radio Balzac begins on Saturday 1 February at 2 pm, when the statue will be lifted by crane from its current location in the garden of the Van Abbemuseum to Het Oog.