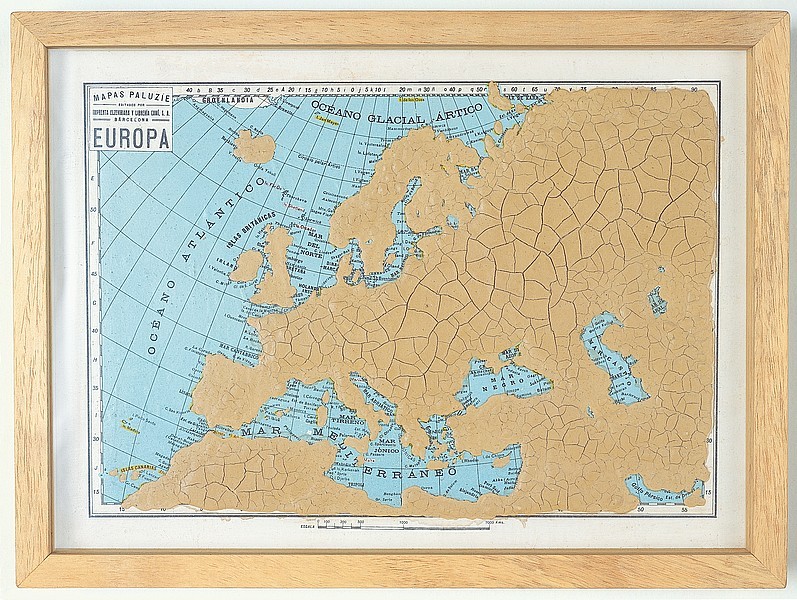 In January 2012 Spirits of Internationalism opens at the Van Abbemuseum in Eindhoven and M HKA in Antwerp. This exhibition takes place simultaneously in two venues and shows art from six European collections: four museums and two artists’ archives. It presents art made between 1956 and 1986, a period marked by fast economic and technological development, but also by international political tension.Spirits of Internationalism shows how the realities of the Cold War influenced art and changed the meaning of ‘the international’ and ‘the regional’. The exhibition attempts to challenge the simplified image of the ‘Three Worlds’ by showing familiar and less familiar artworks in surprising constellations. It includes work by internationally well-known artists and artists who deserve to be recognised outside of their own region.
Spirits of Internationalism is the last part of a series of exhibitions developed within the framework of the European collaborative project L’Internationale. The partners in this project are M HKA in Antwerp, MACBA in Barcelona, Van Abbemuseum and Moderna Galerija in Ljubljana, as well as the Július Koller Society in Bratislava and the KwieKulik Archive in Warsaw.
The exibition takes place simultaneously on two locations:
- Van Abbemuseum, Eindhoven: opening Saturday 21 January, 4 pm. Welcome word by Charles Esche, Director Van Abbemuseum. Introduction to the exhibition by Bart De Baere, Director M HKA. Opening word by Hedy d’Ancona, former Minister of Public Health, Well-Being and Culture.
- M HKA, Antwerp: opening Thursday 19 January, 8.30 pm. Welcome word by Bart De Baere, Director M HKA. Introduction to the exhibition by Charles Esche, Director Van Abbemuseum. Opening word by Michelangelo Pistoletto,
artist and Artistic Director of the Foundation Cittadellarte.
The exhibition continues until 29 April 2012.

Artists in the Van Abbemuseum
Alain Arias-Misson, Stuart Brisley, James Lee Byars, Luc Deleu, Lili Dujourie, Esther Ferrer, Gego (Gertrud Goldstein), Jef Geys, Tomislav Gotovac, Grup de Treball, Paul de Vree, Tibor Hajas, Július Koller, KwieKulik, Fina Miralles, François Morellet, Antoni Muntadas, Pere Noguera, OHO, Panamarenko, Henk Peeters, Józef Robakowski, Tomaž Šalamun, Jan Schoonhoven, Mladen Stilinović, Toon Tersas.
Artists in M HKA
Carl Andre, John Baldessari, Alighiero e Boetti, Marinus Boezem, Marcel Broodthaers, Stanley Brouwn, Victor Burgin, James Lee Byars, André Cadere, Jef Cornelis, Herman de Vries, Luciano Fabro, Dan Flavin, Lucio Fontana, Gego (Gertrud Goldschmidt), Hans Haacke, René Heyvaert, Jenny Holzer, Jörg Immendorff, Robert Indiana, Donald Judd, On Kawara, Anselm Kiefer, Yves Klein, Piero Manzoni, Guy Mees, Cildo Meireles, Mario Merz, Marisa Merz, Bruce Nauman, Michelangelo Pistoletto, Sigmar Polke, Gerhard Richter, Martha Rosler, Ed Ruscha, Jan Schoonhoven, Nancy Spero, Frank Stella, Paul Van Hoeydonck, Victor Vasarely, Andy Warhol, Lawrence Weiner.
Art for a World in Motion
The current crisis in Europe, the shift in geopolitical power from West to East and the Arab Spring compel us to take another look at the second half of the 20th century, when our present world was created. Technology gave us wings with the moon landing, Concorde, television and the computer. A political and economic world order developed with the Cold War, decolonisation, the unification of Europe and the amalgamation of the capital markets. It now appears to be on its last legs.
The works in this exhibition were created during this dynamic period. They show us where we are by showing us where we were. Spirits of Internationalism brings us back to the age of mutual nuclear destruction, the Hungarian uprising, the Cuban missile crisis, the construction of the Berlin Wall and America’s war in Vietnam. Such events were accompanied by images spreading across the world like wildfire. Art was by no means isolated from world developments. In Belgium, for instance, Panamarenko built fantastic flying machines (that did not fly), James Lee Byars created the figure of an ‘extra-terrestrial’ from black tulle which was only completely visible from the air, and Jef Cornelis experimented with television as a medium for new art forms.
International artists’ communities developed as a result of exhibitions and festivals organised in Paris, Kassel, Amsterdam, Warsaw and Zagreb, to mention only some European examples. Art journals and artists’ books were also important for the art world internationalism of the 1960s and ‘70s, which belies the monolithic image of the open West, the closed East and the developing’ Rest. The black-and-white image of the Cold War world hides thousands of nuances of grey and many undiscovered pearls.
Eight Spirits
Spirits of Internationalism shows a cross-section of visual art from the period 1956–1986 that cannot be divided into central and peripheral positions. Each artist offers his or her own perspective on art and its place in the world.
In addition, the exhibition is divided into eight parts, each representing a ‘spirit’ of internationalism. These are: ‘the Concrete’, ‘the Essential’, ‘the Transcendental’, ‘the Subverted’, ‘the (Dis-)Located’, ‘the Universal’, ‘the Engaged’ and ‘the Positioned’. These eight spirits have been retrospectively created to express the tension between the regional and the international in the art of the Cold War period and the tension between the aesthetic or art-specific and the socio-political in the exhibited works.
Do artists feel connected to the universal, or do they actually look at concrete matter? Do they seek their salvation in transnational humanity or do they forge close links with their own environment? Do they play the system in an ironic way or do they industriously search for the essence? All these approaches can be found in art from the period 1956–1986.
The eight spirits do not serve as a straightjacket for the exhibition, but invite visitors to seek for new connections between well-known and less well-known works.

A European Collection in the Making
L’Internationale is a collaborative venture between four museums and two artists’ archives in six European countries. It connects these collections in a series of exhibitions that demonstrate how the recent cultural heritage can be independent of national boundaries. The ultimate aim is to create a ‘European Collection’, or even a ‘Global Collection’. The participating organisations will not amalgamate into an abstract unified entity, but instead gradually create a sense of interconnectedness between, in the first instance, Antwerp, Barcelona, Eindhoven and Ljubljana. L’Internationale will not become the next ‘conglomerate’ in the museum world, but a network that is both pragmatic and ideologically motivated.
The six current partners have in the past two years collaborated on the project 1956–1986. Art from the Decline of Modernism to the Rise of Globalisation, which consisted of four seminars, a conference and three exhibitions, of which Spirits of Internationalism is the last.
www.vanabbemuseum.nl