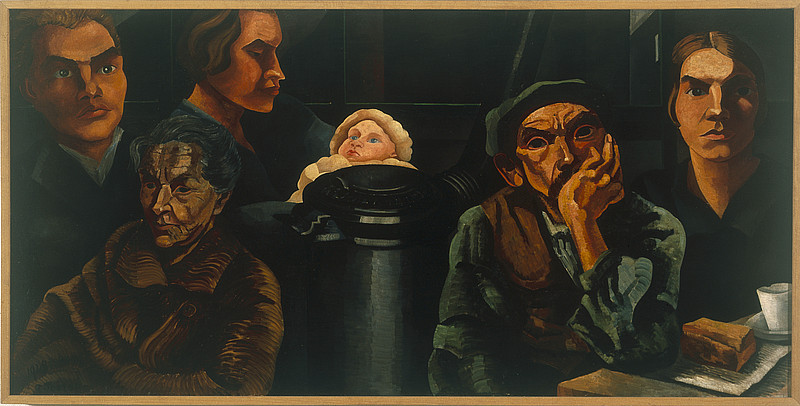 Starting Saturday 9 June, works from the Van Abbemuseum collection are featured in the exhibition These socks not white (Deze sokken niet wit), organised by the artistic duo Bik Van der Pol.
The exhibition focuses on the period 1924-1929, the so-called “roaring twenties”. The years 1924 - 1929 were characterised by great innovation and growth, but was equally a time a of increasing cultural conflict, rising nationalism and economic crisis. As such, there are striking similarities between then and now.
The exhibition includes works by Max Beckmann, Marc Chagall, Theo van Doesburg, Marcel Duchamp, Piet Mondriaan, Pablo Picasso, Charley Toorop, László Moholy-Nagy, Sigmar Polke, Lawrence Weiner, and Andy Warhol, amongst others.
These works are exhibited alongside texts and visual material from the archives of the International Institute of Social History (IISG) in Amsterdam, and films from the period. A walking route will take visitors through parts of Eindhoven, passing by contemporaneous buildings including churches, apartments, a bridge, de Witte Dame, and the former Philips factories at Strijp-S.
The roaring twenties and today: parallels
The world we live in today - and especially Europe, the part of the world we think we know so well - is changing rapidly. The transformation of social democracy to global, neoliberal capitalism and the resulting swathes of privatisation has lead to a loss of public space in the broadest sense. The present crisis is reminiscent of the period 1924-1929. These socks not white does not aim to prove that then and now are the same. Rather, by using the collection of the museum as working capital, it seeks to investigate links with our current timeand to speculate about our experiences in society today and the direction in which we are heading.
These socks not white concentrates on the period 1924-1929, but expands outwards because the spirit of the age never stands still. Key works of the collection before and after these years will be contextualised with a contemporaneous selection of films, books and posters, selected by Bik Van der Pol, from the period, as a means of bringing the spirit of the period to life.
The roaring twenties was a time of paradoxes and extremes. The Weimar Republic reached –following extreme bouts of inflation. There was great innovation and prosperity, but simultaneously increasing cultural conflicts and social polarization, resulting in confusion, fear and nationalism. On the one hand, it was a time of great social, scientific and philosophical breakthroughs,
including the emancipation and women's suffrage, the invention of radio, television and film. The media were booming like never before. Yet at the same time dangerous trends were forming:, extreme fundamentalism, euphoric speculation and consumerism combined with mass unemployment, banking crises, overheated stock markets and ultimately the Wall Street crash of 1929.
These socks not white
The title of the exhibition is derived from a Dada document addressed to the "HH Journalists and Editors", found in the collections of the IISH. This pamphlet,
prepared in response to the fierce criticism Van Doesburg and his associates received after the 'Dada Campaign', says - jokingly - that the socks that Theo van Doesburg wore during the Dada soirees were not white, but 'grisperle’.
Not everything is what it looks like or should be, the pamphlet seems to say. The image created by the media does not (always) convey reality. The way information is generated, what is deemed important and why, as what is chosen to create an image of past and present? How is information conveyed and in what ways can we look at it? And if we think we know what we believe we know, do we see it as well, even if it is not directly said or shown that way?
www.vanabbemuseum.nl