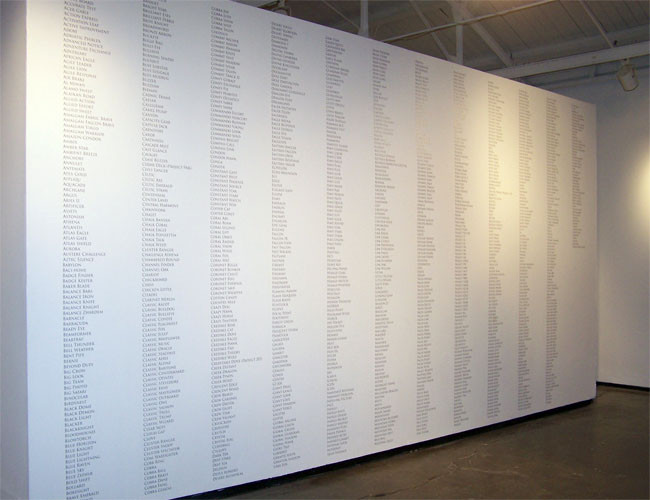 The Van Abbemuseum presents the work 'Code Names' (2007-13) by American artist Trevor Paglen (b. 1974, USA). This vast wall piece, which the artist began in 2007, has been updated and designed specifically for the Van Abbemuseum. 'Code Names' comprises a list of over 1500 words, phrases, and terms that designate active US military programmes whose existence or purpose is classified. The names include classified exercises and units, intelligence programs, information compartments, and Pentagon “Special Access Programmes.”

Trevor Paglen is an artist who deploys a variety of media and research techniques to offer new readings of the world around us – both what we see and what is kept out of view. One strand of his practice has focused on tracking, interpreting and presenting secret operations undertaken by the US military and C.I.A. Developed over many years, Paglen’s practice and perspective takes on added significance with the wave of revelations over recent years surrounding the activity of the US military and its so-called allies, as well as the harrowing surveillance techniques many western governments now operate.

The Code Names presented here are primarily sourced from public budget documents, though the version for the Van Abbemuseum has been updated to include disclosures by the whistleblower Edward Snowden. This list is by no means comprehensive and represents just a small snapshot of a much larger world of secret operations.

Paglen's visual work has been exhibited at the Metropolitan Museum of Art, New York; The Tate Modern, London; The Walker Arts Center, Minneapolis; The San Francisco Museum of Modern Art; the 2008 Taipei Biennial; the 2009 Istanbul Biennial; the 2012 Liverpool Biennial, and numerous other solo and group exhibitions.
He is the author of five books and numerous articles on subjects including experimental geography, state secrecy, military symbology, photography, and visuality. His most recent book, The Last Pictures is a meditation on the intersections of deep-time, politics, and art.

Paglen has received grants and awards from the Smithsonian, Art Matters, Artadia, the San Francisco Museum of Modern Art, the LUMA foundation, the Eyebeam Center for Art and Technology, and the Aperture Foundation. Paglen holds a B.A. from U.C. Berkeley, an MFA from the Art Institute of Chicago, and a Ph.D. in Geography from U.C. Berkeley.