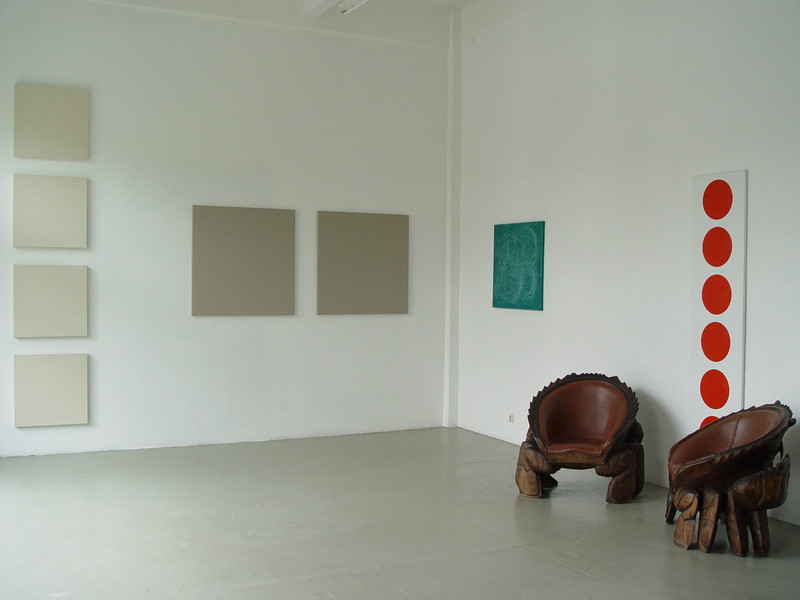 In ‘Hands on Fabrics’ concept and the therefore employed materials are brought into picture equivocal and harsh. The ‘hands’ of five artists become fully visible when the operated plan is brought into the limelight. It is not until then the personal signatures of the artists jump forwards. These can be distinguished clearly when the combination concept-and-image is taken into consideration. Subsequently the individual artist's attitude appears.

A few works show the act literally, but not every artist likes to present his personal touch directly. The works of Olivier Mosset do not involve a physical hand. His act consists of literally duplicating his works, in this exhibition. There are four identical canvases of un-processed cotton; all separately signed and dated as if the works are unique. By making four of the same works, the artist puts the uniqueness into question. It is a radical act that confuses both gallery owner and any collector about its status. The pale linen canvases of Wjm Kok are repetitions of previous works, made in 1989 and again in 2010. At first sight the works also appear to be identical. As soon as one uses another sense than the eye, it becomes clear that the works have been given their own identity; each canvas has been sprayed with its own perfume.

Furthermore the executed acts are literally visible too, as in the work of Klaas Kloosterboer. He namely hand sanded a polished monochrome canvas with sandpaper and left a trace of his ‘hand’. Elvire Bonduelle literally leaves traces of her hand, i.e. she printed her wall- and seat cushion with paint coloured fingers.

In this manner acts of a plan in various ways are shown and the artist's attitude becomes visible.
www.galerievangelder.com