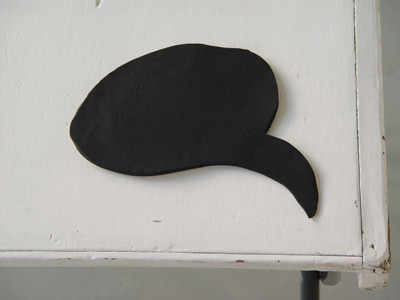 © Ola Vasiljeva
Speach cloud, 2012
keramiek, matte glaze
TO MAKE A SHOW IT TAKES A THOUGHT AND MORE THAN ONE WORD
1 September - 13 October 2012

'To make a show it takes a thought and more than one word' (Part II) is an exhibition in which art works in an investigating manner are related to text and image. The works are not just about texts with an empty plane as background, as seen for example in the joke paintings of Richard Prince or in the stencilled letter paintings of Christopher Wool. In the works on show the linguistic image does not play the most important role. Here words and sentences have a strong tendency to behave as no more than of typographical value, caused by a pictorial element that pushes aside the meaning of the text, such as in the work with plusses and minuses of Kristjan Gudmundsson, that is called 'A philosophical plan of a blood relative' (1986). Or in a drawing of Suzan Noesen, in which a lemniscate-like form seems to cause a problem.

In the exhibition in various ways the content of a message is suppressed due to a striking colour or the practicality of e.g. a shopping bag. An installation of clothing with text brooches 'Pour faire joli' (i.e. 'To make nice') of Elvire Bonduelle is an example of how text content is shoven away. In several works no more than a suggestion of a message is given, as in the empty floor sign/sculpture of Nicolas Chardon, the wordless black speech balloon of Ola Vasiljeva and in 'The Walk III' van Ansuya Blom in which a handwritten text suggests a readable text. In all these cases the pictorial image is dominant.
In short, in the exhibition 'To make a show it takes a thought and more than one word' (Part II) text and image move between a suggestion of an announcement and the unequivocality of an applied function. The meaning of a paper shopping bag of Dan Graham with a contemplating text about human measurement and the immensity of cosmos cannot be more trivial, but on the other hand what is more obvious than a factual text on a shopping bag?
www.galerievangelder.com