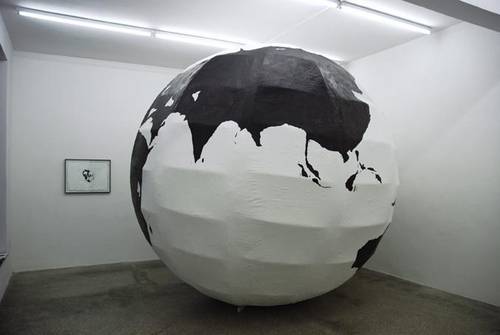 KATIE HOLTEN
"The Best's To Come"

In her second solo-exhibition at the gallery, Holten will present two large-scale pieces that are a development from her ongoing exploration of ecological concerns. Through her recycling of low-tech materials, Holten characteristically creates 'drawn objects' that lie somewhere between functional object and discarded refuse. A globe, approximately 3 meters in diameter, is literally constructed from current affairs, as it is moulded from newspapers (Die Welt). The news has been obliterated as the surface is painted white and the new world has been drawn in black. As it is drawn from memory, the world map becomes an unfamiliar image. Landmasses are enlarged, distorted or sometimes forgotten altogether. Perhaps the changing shorelines that Holten draws will be the world some time in the future, or as it was some time in the past? The drawing (4.5m x 3m) is entitled ‘The Last High’ and presents an image of intense meteorological turmoil, as low fronts and high fronts collide and condense.
“Katie is a true nomad working on an intimate level to change the world. She is grassroots in her management of social and political situations, always addressing her artwork with a child-like naiveté and the desire to understand and perhaps catalog the worlds around her.[1] “

A fully illustrated book will be published after the exhibition.