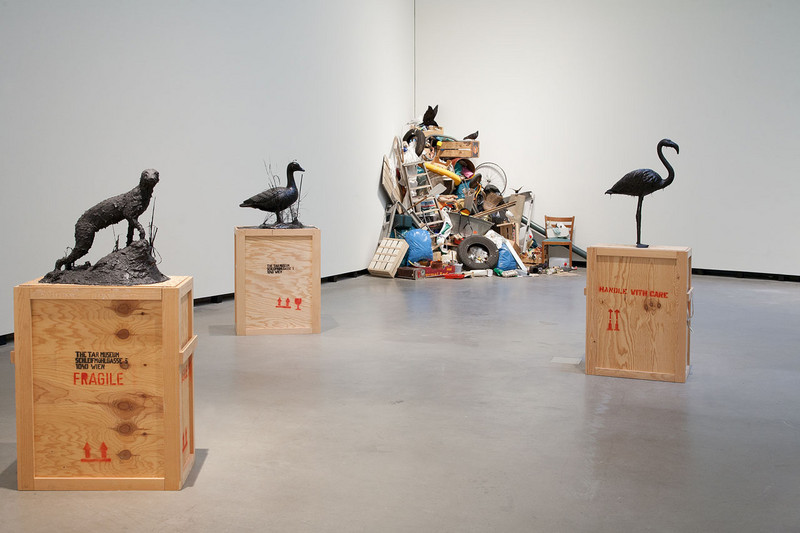 With his artistic “research work” on nature, his passion for collection and his precise ecological questioning, the American artist Mark Dion engages with the primeval relationship between man and his environment.

Yet instead of lapsing into romanticized yearning for nature, he specifically questions traditional ways of thought and teaching. As Mark Dion puts it: “My work is not really about nature, but rather it is a consideration of ideas of nature.”

Employing philosophical clarity, humour and great sensuality, Mark Dion transforms the Gehry Galleries into a tour of nature study laboratories, museum depositories and mysterious hunting grounds. Highly detailed raised hides describe the hunter as both an authority on nature and a hedonistic sportsman. The artist repeatedly slips into the role of an explorer discovering new worlds with a mixture of fascinated curiosity and fear of the unknown.

Elsewhere, Mark Dion uses a more drastic image to spotlight today’s accelerating environmental destruction: a mobile diorama featuring a bison and a wolf as well as an aviary containing live birds bringing nature – or representatives of it – right inside the gallery.

Alongside participation in many international exhibitions, in 1997 the artist (born in 1961) took part with a major contribution in the Biennale in Venice and in 2012 in the documenta 13 in Kassel.
www.marta-herford.de