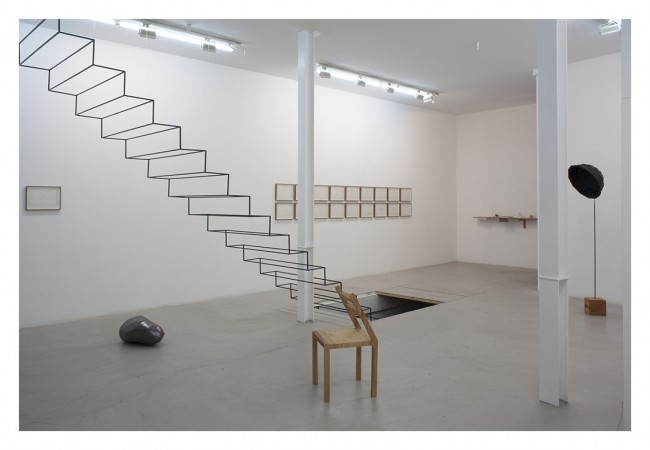 While looking through my sketchbooks I came across a series of drawings, annotations and objects. The truth is, I couldn’t recall if I had actually seen those things before or just imagined them. Almost an Object, the present exhibition, includes some of the pieces found in those sketchbooks.

Drawing is the main focus of my work; I’m interested in the possibilities it offers of being two or three-dimensional, planning and carrying out and even between what is real and what is made up.

I remember doing the staircase –that is, a sketch of a staircase– after a visit to the gallery. I imagined this site-specific piece as a spatial drawing. I had done this in a way in my sketchbook, crossing over onto two pages. By taking the measurements of the tread and riser (25 x 20 cm) at a 90 degree angle and repeating the pattern, the stairs could go on indefinitely.

Nearby, the series Spatial Drawings, No. 2 shows an organically formed automated pencil hovering in the air. The literal transcription from the page in my sketchbook reads: ...repetitive trompe l’oeil.

A series of 108 charcoal-on-paper, 100 x 70 cm drawings titled Apartment 402 is located on a pallet on the floor. This fragmented drawing represents my apartment in Bogota. It is a full scale architect’s plan of the apartment, totaling 55 square meters.

The graphite rock is a drawing.

The series of drawings titled A4 are inspired by the technical drawing I did when I studied architecture. The fact is, I didn’t want to be an architect. Once I decided to study visual arts, I kept drawing with the same tools and formats. Hence the spaces and objects I design are not very functional. The Draftsman’s Chair, which has a 33 degree inclination –the same inclination I have when drawing– is a clear example.

Based on annotations such as “...draw the sections of an apple that has been cut up,” “...A4 sheet in layers” or “...most of the things that surround us were initially drawn” the following drawings began appearing on my desk: The Broken Down A4 Sheet, the same format used for the series of drawings A4, Paper Compass, Folded Book, Drop and Apple. The Celestial Sphere is a paper assemblage which is perforated by the star chart. Drawing the constellations there is the same exercise as picking out the constellations from the heavens.

Paper Font, a 59 x 42 cm lithograph, is the result of a fixation with folding and joining points. This typographic alphabet, which includes the letters from A to Z and the numbers, is made up of raised characters abstracted by the folds in the paper. This matrix gives way to the series Paper Poems. (Dimensions vary.) Every so often I decide to use this font to write down sentences or words that I record in my notebooks. On this occasion, it says: Things are never what they seem.


Take Manzana, 2011, his sculptural rendering of an apple (a recurring motif). Eight slices of papersuggest the spherical shape of the fruit, while also conjuring the form of its pared sections. Themateriality of paper itself evokes the soft texture of pulp; the thin red line drawn around the paper’s edgeto define it in space heightens this optical play. The addition of an apple’s actual stem and seedsestablishes a tension between the quasi verisimilitude López achieves and the real, physical object. ForPuerta, 2011, another work in “Maio,” López built a white wooden frame with a white paper door,propping it ajar against the gallery wall. This sculpture acted as a frame of reference for the visitor,hinting that the works in the exhibition were as much portals in time to pass through as they wereobjects in space to walk around

In López’s domain, drawing and its paper support constitute a medium that enables travel, both literaland figurative, through many dimensions, involving historical, fictional, and personal narratives as muchas the performative and sculptural narrative of the malleable, flat, fibrous material. The studio itselfbecomes transient: On multiple occasions, the artist has embarked on drafting expeditions, channelingthe twentieth-century nomadism of Che and Bolaño or of European modernists such as Duchamp andAlighiero Boetti. Ever since his first solo exhibition at Galeria Casas Riegner in 2006 in Bogotá,Colombia, López has been known to turn spaces into makeshift workshops. (In his 2010 installation for the Twenty-Ninth São Paulo Bienal, Palacio de Papel [Paper Palace], the artist nested a studio inside asplit polyhedron, fashioning almost everything within, from pencil sharpeners and tubes of paint to paperclips, out of paper.)

In his ongoing project Viaje sin movimento (Traveling Without Movement), begun in 2008, Lópezretraces the defunct railroads of Colombia (declared a national architectural heritage site in 1986) inorder to record the oral histories of the people who once worked on them and who still live along thetracks. Constructed beginning in the mid-nineteenth century, the railroads could be consideredColombia’s Fitzcarraldo, devoured by time and the jungle. After more than half of the national projectwas completed, it was abandoned as a result of bankruptcy, corruption, and the engineering challengeof laying down track on the steep terrain of the Andean Corridor. López documented his first three of fiveplanned trips along the rails with drawings, maquettes, found objects, sculptures, and a video, installingthese materials in and around a studio he built inside a freestanding wooden staircase.

López first saw many of the abandoned train stations by motorbike in 2007, again packing his studio inhis suitcase for a journey through numerous Colombian cities as part of Diario de Motocicleta, a satiricreflection on the Motorcycle Diaries of Che. The drawings López made on the road are collected in abrochure, a kind of foldout map of his travels. In contrast to the revolutionary figure his project cites,López assumed the position of an antihero, thoughtfully recording his journey in notebooks and turningthe experience into installations at art spaces in Bogotá, Medellín, and Cali.

THE JOURNEYS IN LÓPEZ’S DRAWINGS trace back to the beginning of his practice. Born and raisedin Bogotá, López studied architecture for a year at Pontificia Universidad Javeriana before attending theUniversidad de los Andes. There he took classes with the influential artist and critic Lucas Ospina,whose innovative drawing exercises challenged López, as an extension of his architectural training, tothink beyond a rectilinear, flat plane.

Since then, López’s engaged correspondence with artists has been a salient aspect of his work, inwhich drawing assumes the form of a conversation. In 2007, he initiated an exchange with the Medellín-based artist José Antonio Suárez Londoño, another pivotal figure for a generation of younger artists inColombia. Londoño begins each day by reading, then making a related drawing in a notebook. (Aselection of these books can be seen in his first survey in the US, at the Drawing Center, New York,which opens this month.) López and Londoño’s visual dialogue also occurred in a series of notebooks,mailed back and forth, and slowly filled over several years as they each added compositions, eventuallyproducing the artists’ book Dibujos (Drawings), 2007–2009. Their ongoing collaboration also led to PingPong, 2010, a collection of sixty-two drawings they worked on separately based on thirty-oneheterogeneous word prompts, including tree, architecture, song, corners, geometry, and landscape.

This past February, López began another dialogue, with William Kentridge. Much of their discussion hascentered on how to incorporate narrative into drawing and how to include the viewer directly in a story.This exchange permeates the young artist’s largest and most elaborate exhibition yet, which opened inAugust at Galeria Casas Riegner. López takes the labyrinthine and spatial flow already explored inexhibitions such as “Maio” even further in this work, which stems from his memory of the room where hewas born. Not unlike Borges’s famous garden of forking paths, in which time itself collapses anddisperses, Avenida Primavera, Casa No. 2 (Spring Avenue, House No. 2), 2012, is a fictional book oneliterally walks into; it also alludes to a house in Bogotá, whose illusory address serves as the exhibition’stitle. Twelve installations double as the book’s twelve chapters, taking over four main galleries at CasasRiegner and even extending into the office and outside. On entering the gallery-cum-book-cum-imaginary-house, one receives a small, simply bound hundred-page book that serves as the exhibitionguide—the book within the book—where, again, the Proust quote appears as an epigraph. In anintroductory drawing in the first gallery, Nota de Autor (Author’s Note), 2012, López primly writes out thenumbers of each book page in alphabetical rather than numerical order—a reshuffling that gives theviewer permission to roam freely throughout the pages as linear time falls away.

Chapter 2, Archivo (Archive), 2012, unfolds in a room crowded with empty shelves that uncannilyresemble the green metal storage units commonly found in Colombian bureaucratic offices, thoughLópez made his from cardboard. The palpable emptiness of the shelves conjures an imperiled state ofmemory, connected to the proliferation of technological devices that replace the human mind’s capacityto recollect. But the physical experience of being inside a book is heightened through a sensoryencounter: Walking into this room, one smells paper. The odor emanates not from the shelves’ material,but from a special fragrance López made, based on the scent of old books and magazines. Paperemerges yet again in his practice as his Proustian madeleine, summoning our evanescing past throughits own obsolescence. López’s oeuvre introduces a new paradigm for such memory travels.Complicating the ubiquitous archival impulse in art production, his work relies on a kind of architecturalframing that, like a Möbius strip, loops back on time as much as space.