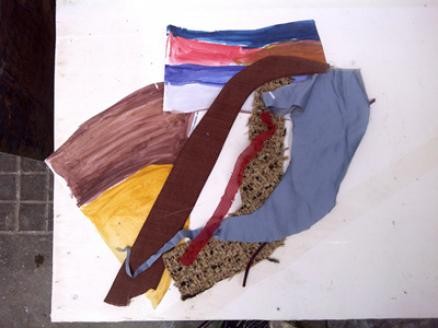 PEER's gallery comprises two shops, which together form a double-frontage unit that faces squarely onto the street. The space is modest, and almost domestic in size. These once-commercial units are connected internally by an opening that is roughly the proportions of an average doorway.

On the wall opposite the entrance of the first space Karin Ruggaber has installed a multi-part, polychromatic sculpture, the individual elements of which are made primarily of moulded concrete. This constellation of smaller components is precisely arranged and fixed to the wall to make up a large diagonal relief that stretches from the floor to nearly the height of the ceiling. In the second space, the same sculptural language of material and form is used, but Ruggaber here works with the horizontal plane of the floor. Once again she employs the diagonal, so that a large triangular shape emanates from the furthest corner of the doorway and sweeps across into the centre of the room. Ruggaber has described this work as an attempt to "build a haptic floor". These two large, singular works each inhabit their respective domains. Put simply, a work for the wall and a work for the floor.

Two further elements make up Ruggaber's exhibition for PEER. For the large window ledges in the first gallery space, Ruggaber has made a series of "sculptural propositions – nominal, open-ended objects". These delicately and deftly entangled pieces are made from fabric, paper, wire and other kinds of delineating armature. Using this area as a place for display, Ruggaber has treated the windows as the intersection between the view into the space from outside as opposed to the material experience of the work from inside.

The final element of Ruggaber's project is an online film work realised via PEER's website – its other publicly accessible platform. This seven-minute video edited as a sequence of shots of low-rise apartment blocks, sits within an on-going series of published projects about a residential suburb of Istanbul. In terms of both its medium and site, this work is distinct from the sculptural forms encountered in the gallery spaces; it can also be regarded as a framework around her thinking about these elements, locating Ruggaber's taxonomy of reference.
The dynamic between inside/out, floor/wall, soft/hard, decoration/function, spatial and online experience is a language of disparate parts, which in its subtle complexity is characteristic of Ruggaber's practice.