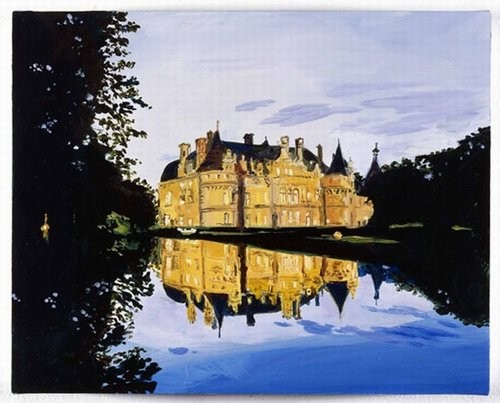 Usually, a curated group shows works like this: you decide on a theme and then look for appropriate works. With HIGH IDEALS & CRAZY DREAMS this happened the other way around.

Gerwald Rockenschaub, this time not exhibiting but compiling the show, looked for artworks that were of inspiration to him during his artistic career. The result is a dialogue of heros such as Ellsworth Kelly, Gerhard Richter, Ad Reinhardt, Richard Artschwager, Blinky Palermo, Imi Knoebel and Mary Heilmann with the middle-generation (amongst others John Armleder, Herbert Brandl, Thomas Demand, Fischli/Weiss, Sylvie Fleury, Rosemarie Trockel) and very young positions such as Tomma Abts, Saadane Afif, Mai-Thu Perret, Florian Pumhösl, Anselm Reyle or Katja Strunz.

The concept for the show evolved from a conversation with Vera Munro, who did Rockenschaub's very first solo show in Germany in 1984. "It was very important to me having someone to question my personal attitude towards art and thus open a new view on specific artists", says Munro in retrospect. "Though, during our discussion about the show and the participating artists, Gerwald and I realized, that we do not differ in one single position. That was a very positive experience for me as we have worked together for such a long time and have exchanged many thoughts about art."

Essential for the selection of the heros was the complete artistic concept of each artist, whereas for the young ones the specific artwork was decisive. "I simply scanned my environment and gathered everything I found interesting", says Rockenschaub. And this is also why he purposely does not speak of a curated exhibition but of a compiled one, such as in the style of a music compilation on CD. The title of the show was then fittingly provided by British Post-punk musician Mark Stewart. "HIGH IDEALS & CRAZY DREAMS summarizes this exhibition very well", says Rockenschaub. "Because art commits itself to a high ideal, but has its origin always in the visioned idea. And because it describes very well the creative tension between established positions and young dynamics." Despite these extremes, this can match very well. "The exciting thing about such a show is, that quality always harmonizes, no matter from which era", adds Vera Munro.


Information on Gerwald Rockenschaub:
The colorintensive images, installations, objects and animations of renowned Austrian artist Gerwald Rockenschaub (born 1952) are characterized by a sensible concentration on forms and colors. Rockenschaub, who studied in Vienna at the University for Applied Sciences and first started off as a musician and DJ, began in the 80s to create pictograms and oil paintings related to the movement of the so called Neo-Geo. These works were followed by installations and sculptures involving the exhibition space. In 1993 Rockenschaub, by now living in Berlin, represented Austria at the biennial in Venice. In 2007 he received the Fred-Thieler-Prices and exhibited at the Documenta 12. The original facade of the Temporäre Kunsthalle Berlin, a pixeled cloud, was designed by him in 2008.
The work of Rockenschaub has been shown in several important solo exhibitions, for example at the Kunstmuseum Luzern, the Kunsthalle Bern, the Kunstmuseum Ludwig Vienna and the Kunsthalle Nürnberg. In 2011 the Kunstmusem
www.veramunro.de