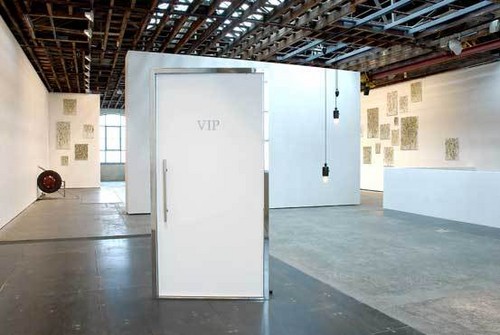 Absent Without Leave examines the ways in which contemporary artists might use elements of performance as a material in the production (or reception) of their work. The diverse practices on display here re-imagine performance and filter it into something 'performative' - expanding gestures, actions, characters, and roles into works which incorporate performance as process.
Conceptual and performance artist Vito Acconci has discussed how, at a certain point in his career in the early seventies, he decided to appear less in his work, so that his presence was more of an absence. Absent Without Leave borrows the spirit of Acconci's decision and uses it to platform an investigation of the idea of the 'absentee performer' - an idea in which the 'performer' (the artist ) is relocated from a visible presence, to a presence which is recorded in the conceptual fabric of the art works themselves.
The exhibition features works in which: there is potential within an art object for action to happen, which may or may not necessarily occur; there is a live event without a performer; there is a physical trace of an event which in fact never occurred; or there is a possibility to read the environment as something staged, or as a set awaiting a narrative.
Absent Without Leave presents works by 12 international artists, with new commissions by Elmgreen & Dragset, Loris Gréaud, Terence Koh, Systems House, Andro Wekua, and Jordan Wolfson; an installation of 40 new paintings by Dan Colen; and projects by Jeppe Hein, Kirsten Pieroth, Michael Sailstorfer, and Andreas Zybach. A performance orchestrated by Roman Ondák will take place on the evening of the opening.
Absent Without Leave has been curated by James Lindon and
Erin Manns.