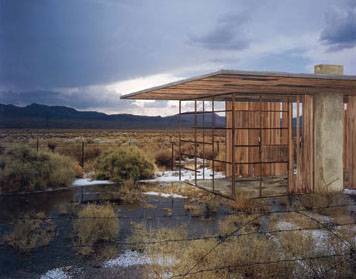 Don't want to be part of your world is a series of large-format landscape photographs Alex Hartley has taken in remote locations around the world. To these idyllic, desolate vistas he has inserted detailed architectural models meticulously built in relief on the surfaces: deserted geo-domes nestle amongst the rocks of the Mojave Desert, a Bond villain glass-walled retreat sits unassailable on a high Arctic ridge, a crumbling Case Study house sits abandoned on a plain, slowly returning to the California desert. Within the esoteric narratives that the works establish lies a subtle sense of failure, a dystopian vision of architecture and attempts to inhabit the uninhabitable. This exhibition marks a departure from the encased photographs of architectural spaces for which Hartley is well known, and denotes a shift in Hartley’s focus from a formal concern with the representation of space to an interest in how we imagine ourselves within it.

These works reference the collage and photomontage techniques of such architectural visionaries as Superstudio, Archigram and Cedric Price. From the mid-to late-1960s, these and other architects used collage and photomontage to bring to life unrealizable projects – whether idealized and utopian, or impossible to build due to scale and ambition. Hartley’s imagined structures sample the architecture of Buckminster Fuller, John Lautner, and Richard Neutra, and also incorporate portable or temporary dwellings, matching the invented building to the landscape of the photograph. Within the esoteric narratives that the works establish lies a subtle sense of failure, a dystopian vision of architecture and our attempts to inhabit the uninhabitable.

In the project gallery, Hartley presents photographs of an arctic village built for Swiss and Scandinavian scientists conducting research during the International Geophysical Year of 1957 and deserted only months later. The images reveal a slowing of the effects of time, with no signs of decay evident in the shuttered buildings. Zero humidity at the 80th parallel has prevented any physical deterioration of the shelters on the remote ice cap, leaving each preserved exactly as it was left.
www.victoria-miro.com