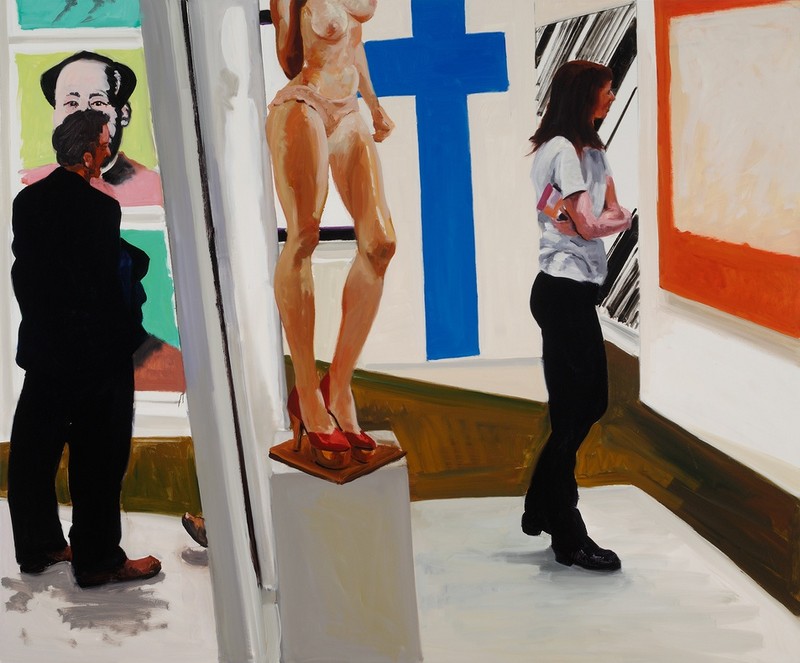 Victoria Miro is pleased to announce the gallery's first exhibition with the prominent US artist Eric Fischl.

Eric Fischl made his reputation in the 1980s with large-scale figurative oil paintings depicting ambiguous, erotically charged scenarios set in the American suburbs. Since that time his practice has developed, although his focus remains on representations of the human figure, depicted singly, as in his sculptural work and watercolours, or in complex groupings, as in this new body of paintings.

This series takes as its subject the contemporary art market. The paintings depict art fairs and gallery openings, and feature intricate compositions where people and artworks are layered in sophisticated arrangements of form and colour. Fischl has always been a keen observer of the relationships between people, and between people and their surroundings. These paintings demonstrate the artist's acute observation of body language and the small details that reflect social relationships, particularly in the heady environment of the art fair, with its charged atmosphere of money and taste, financial and cultural capital.

Art fairs are notoriously busy, and these paintings give a sense of the energy and bustle as visitors move amongst the stands, apparently giving as much attention to each other - and to their mobile phones - as to the artworks on display. In these images, rather than acting as a backdrop to the human activity, the artworks function as characters in the scene, silent witnesses to the drama unfolding around them. Fischl has described this effect:

"The space in these paintings is collapsed, cluttered, irrational and aggressive. Those depicted in the scenes seem oblivious to the mania of their condition.... What I've discovered as I moved into this work is the essentially abstract nature of the art fair spaces. They are nearly cubistic in their flatness and their jarring collaged constructions. You see a booth and through it another and through it another, each booth showing works that have their own, often contrasting, spatial illusions. For a painter, it is a rich environment to try and capture. Layers of consciousness on top of layers of cross-purposes. I am falling in love with it. Not because it is the proper place for art but because it is such a rich environment to make art about".

These works have been informed by the development of the contemporary art world over recent decades, as a previously more insular, scholarly culture has transformed into a more market-driven scene appealing to a new class of international plutocrats. Fischl's fair scenes are populated by an array of types that appear recognisable but potentially also ambiguous and fluid in their identity: artists, collectors, gallerists, curators and hangers-on.

In keeping with Fischl's usual working practice, the starting point for the series are photographs, in this case predominantly taken by the artist himself at art fairs including Art Basel Miami Beach and the Southampton Art Fair and at openings of gallery exhibitions in New York. Fischl uploads images to Photoshop, where he collages them until he constructs an image that he wants to translate into a painting. As the series has grown so has the complexity of the resonances of the images, individually and in relation to each other. The paintings are a sharp social satire as much as they are a loving tribute to the world the artist knows best: the international art scene.
www.victoria-miro.com