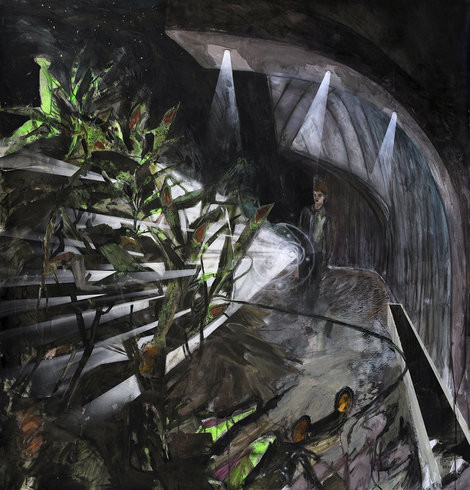 Victora Miro is delighted to present The Hallucinations of Poets, the third solo exhibition with the gallery by Hernan Bas.

The American painter Hernan Bas's practice has always been intrinsically linked to an exploration of literature and the written word. For an exhibition earlier this year, Bas presented works referencing the American Transcendentalists (Emerson, Thoreau, Alcott) - or, in Bas's words, the 'original hippies', as their writing suggests a 'back to nature' perspective. In The Hallucinations of Poets, Bas delves into the more foreboding preoccupations of Dark Romanticism. Whilst Poe, Melville, Hawthorn and Dickinson shared the belief with the Transcendentalists that nature is a deeply spiritual force, they took an inherently sinister stance to the Transcendentalists' innately optimistic views. For these Dark Romantics, the natural world is full of shadows, decay, mystery, ghosts and death. These works, the first series in Bas's oeuvre to directly address the realm of poetry, are characterized by a sombre palette and charged, mysterious atmospheres.

In one painting, The Hallucinations of Poets (dandelion), a young man in a shimmering landscape encounters a floating dandelion seed, which seems to possess a luminous magic. In another work, The garden always felt different at night, a boy approaches the edges of dense foliage in an ominous gloom, his torch carving shards of light through the leaves. Youthful males - alone or in pairs - inhabit these territories: landscapes full of the fantastical somehow borne of the banal. Darkness and light, the known and unknown, are all forces that coexist in Bas's works, creating otherworldly, rich images, regions defined by the outer reaches of imagination, and a nature rendered both familiar and strange.

This is the first body of work completed entirely in Bas's new home in the city of Detroit. Here, far from Miami where he had lived since birth, Bas encountered an entirely different version of nature in his garden surroundings. Inspired by these experiences together with his readings, Bas's works endeavor to capture the poetic imagination, and suggest that moments of reflection allow the ordinary to become extraordinary.