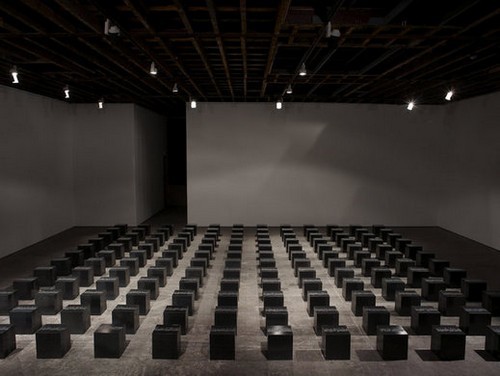 Victoria Miro is delighted to announce an exhibition of new work by Idris Khan.

Idris Khan's second solo show with the gallery, will consist of two major sculptural installations and a number of new photographic works that interlink seemingly disparate ideas of religion, Minimalism, and musical scores. Khan's new body of work has a more formal engagement with the material he appropriates, in order to elicit a kind of poetry and spirituality using a Minimal aesthetic.

Occupying the upstairs gallery is the show's eponymous work, a large-scale floor installation that consists of 144 cubic forms made of oil-sealed steel that resemble the Kabba in the city of Mecca, the object which Muslims face towards during daily prayer and the most sacred site for Muslims to visit at least one time in their life. The code of this holy place requires that pilgrims circumnavigate the Kabba seven times, counter-clockwise. The Kabba is understood to be the location where a meteorite had fallen to unite heaven and earth, and is considered to be the centre of the world and the gate of heaven. In his own words, Khan describes: "This cube is never not being circled by people. A constant flow, circling a black box - and it is believed that if this stops then the world ends."

Arranged with precision in equal rows to create the exact dimensions of the footprint of the Kabba, each cube is sandblasted with different grains of sand to inscribe the Arabic prayer that Muslims perform five times a day. Through this technique, what remains is a light, soft, poetic mark made through a process of aggressive removal of surface. The fragments of the prayer which bisect each cube have been repeated and superimposed five times, in a process akin to Khan's characteristic layering of appropriated material in his photographic works.

The installation Seven Times embodies the Minimalist principles of works by artists like Carl Andre, such as the use of industrial materials, the employment of modular units, and the articulation of three-dimensionality through its use of negative as well as positive space. Andre also experimented with poetry, searching for 'linguistic equivalents' to his sculpture.

Also referencing Andre's work, in the main gallery is Khan's sculptural piece Listening to Glenn Gould's Version of the Goldberg Variations while thinking about Carl Andre, consisting of 30 steel panels aligned in two rows, through the centres of which runs a continuous line of music from Gould's version of the Variations.

A number of new photographic works include The Creation, which appropriates Joseph Haydn's oratorio of the same name, considered by many to be his masterpiece. Haydn's work is about the origin of the world and took him so long to complete that he become a devout Christian to summon the strength to finish it. Another photo-work arranges each of the twelve poems of Milton's Paradise Lost in a grid, collapsing these epic verses about the Fall of Man into illegible lines and spaces. Through the dense layering of his material, Khan creates elegantly abstracted linear fields that resonate with a new formalism.

Born in Birmingham in 1978, Idris Khan received his MFA from the Royal College of Art in 2004 and lives and works in London. He had a major solo exhibition at K20, Düsseldorf in 2008 and has also exhibited at The Museum of Contemporary Canadian Art, Toronto 2009, Espace Louis Vuitton , Paris 2009, Baibakov Art Projects, Moscow (2009), IKON, Birmingham (2009), Martin-Gropius-Bau, Berlin (2009), Andalusian Centre of Photography, Spain (2008), Art Dubai (2008), Forum d'art contemporain, Luxembourg (2008), inIVA, London (2006), San Francisco Museum of Modern Art (2006) and Helsinki Kunsthalle (2005). Khan will feature in the forthcoming exhibition Haunted at the Solomon R. Guggenheim Museum in New York (2010) which will travel to the Guggenheim Museum Bilbao.
www.victoria-miro.com