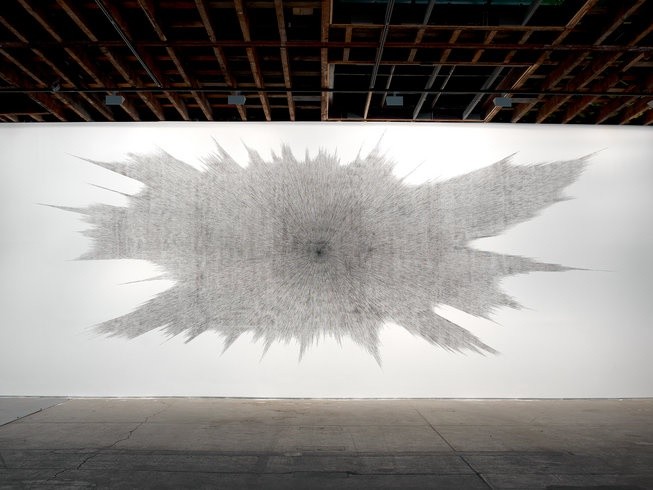 Victoria Miro is delighted to present a new body of work by Idris Khan in his third solo presentation with the gallery. Beyond the Black (20 September - 9 November 2013) marks an important departure from Khan's photographic based works and comprises a suite of large black paintings, a monumental site specific wall drawing and a series of works on paper, all of which consider the metaphysics of creativity.

In the exhibition's seven paintings Khan uses a mixture of black pigment, rabbit skin glue and slate dust, to create an absorbent ground which he applies to aluminium panels or directly to the wall and then sands back to produce a smooth, slate-like surface. The paintings are intensely dark with a dense radial constellation of words creating an image that suggests a contained energy emanating from a central point.

Following on from earlier bodies of work in which he referenced the writings of Agnes Martin, Jean-Paul Sartre and early Sufi philosophers, these new works incorporate Khan's own writings, inspired by his reading of Friedrich Nietzsche's The Birth of Tragedy.

The works are gradually built up with strands of text applied on top of one another in red-black oil based paint. During the making of the works the glossy words disappear into the black ground surface until they become saturated to such an extent the words slip from tangibility into abstraction. This denial of legibility thwarts a basic human desire to understand and to establish meaning. The further we manage to see into the text the less easy it is to comprehend.

The writings that make up the canvas, wall and paper works in this exhibition have profound resonance for the artist and describe his approach to creating work. Some focus on visual details, while others have a more personal quality. However, for the viewer their full meaning is elusive. Khan appears to suggest that our linear experience of time and place has a more shadowy relationship with memory and the subconscious, and that they cannot be so easily grasped.

In thinking about these works Khan was also acutely aware of the great twentieth-century masters who worked with an intense, black on black palette, including Mark Rothko, Ad Reinhardt, Agnes Martin, Frank Stella and Richard Serra. Repetition and action have always been central to Khan's practice along with a restricted set of processes. His earlier works touch on the subject of totality, photographing every page of the Koran, or overlaying every note of Beethoven's sonatas to bring photography closer to painting. His more recent body of work saw him drawing on a chalkboard, repeatedly photographing his marks to an abstract state. This new work focuses on the repeated process of the hand and its direct contact with its surface.

Khan's work is a continuous process of creating and erasing, or adding new layers whilst retaining traces of what has gone before. The large wall drawing, which will be created by the artist in situ in the gallery's upper floor over a period of a month will consist of more than 120,000 lines of text, again forming a giant radial form.

Khan has commented: "Through repetition one is allowed other freedoms: perhaps that of thought outside of the words' linguistic formulations and into abstract territory, that of drawing figures that might be letters in one time and pure nothings in another. The title Beyond the Black asks you to think of looking past the surface of the painting, past the existence of the words and through the work to the meaning of its creation."

Born in Birmingham in 1978, Khan lives and works in London. He is currently collaborating with Wayne McGregor and composer Max Richter on Richter's recomposition of The Four Season's to be performed at the Zurich Opera House in April 2014; where Khan will design the sets. His monumental sculpture Seven Times, 2010 is touring to Doha Museum of Islamic Art from October - December as part of the British Museum's Haaj exhibition. In 2012 he was commissioned to make five works for the New York Times Magazine and his image of the London Eye featured on the cover. TIME magazine choses it as one of the top magazine covers of the year.