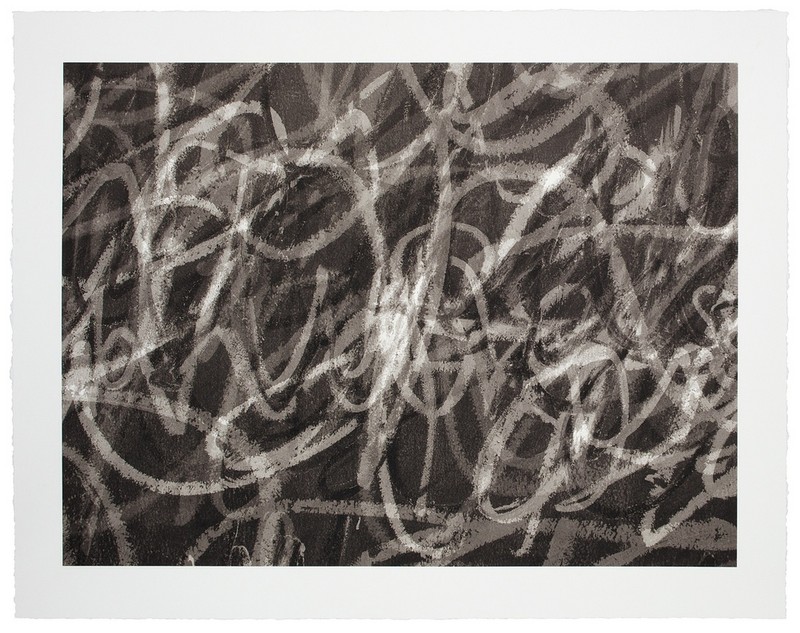 Victoria Miro is delighted to announce an exhibition of new work by Idris Khan in the artist's fourth solo presentation with the gallery.

The exhibition is accompanied by a fully illustrated catalogue with a poem by Imtiaz Dharker, view an online version.

Working across mediums including sculpture, painting and photography, Khan is well known for his large-scale works, which use techniques of layering to arrive at what might be considered the essence of an image, and to create something entirely new through repetition and superimposition. For his exhibition at Victoria Miro Mayfair, Khan has produced large-scale composite photographs made from a series of oil stick paintings. These have gone through an intensive process of overlaying lines of writing repeatedly painted onto a minimal ground, until the language becomes obscured. Documenting the journey of the paintings, Khan collects details of the line from every angle, and in doing so has the ability to constantly change its nature. The words are a response to the barrage of media images of conflict that are 'un-escapable' in today's world. By using Roland Barthes' theory of the 'punctum', Khan writes about a certain personal touching detail of an object or person that jumps out of the photograph and holds his gaze.

The exhibition also includes a series of five 12 x 16 inch platinum prints, whereby a negative is made the same size as the finished image; it is then contact printed onto a sheet of paper painted with platinum and iron salts, and finally exposed in daylight. Titled 'Church Walk Studio', these delicate, richly toned images have the quality of watercolour, which furthers Khan's intrigue into pushing the boundary between a painting and a photograph.

Idris Khan's work is a continuous process of creating and erasing, adding new layers whilst retaining traces of what has been. Often addressing philosophical or metaphysical themes in his work by superimposing thousands of photographic moments into one single image, he creates an expanded sense of time. The final photographs show Khan's ability to capture the impossibility of seeing every stage of a painting.
www.victoria-miro.com