In the Company of Alice 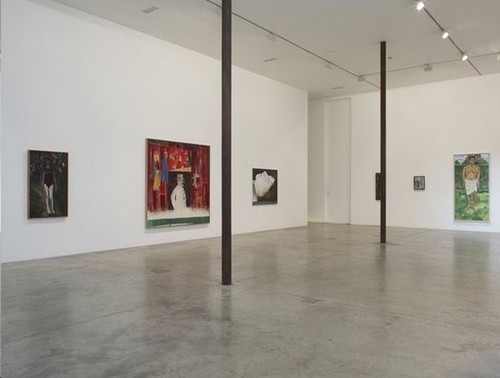 Installation Victoria Miro, London. All works © the Artists
IN THE COMPANY OF ALICE

In the Company of Alice presents portraits and figurative paintings by a diverse group of artists - some established and some emerging, some for whom portraiture is the crux of their practice and others for whom creating a portrait has been a new exercise.

A number of these artists admire or have been inspired by Alice Neel, and it is for this reason they have been brought together in an expanded homage to the ongoing influence of the late American painter which coincides with the first solo exhibition of Alice Neel's work in a European institution, opening at the Whitechapel Gallery on 8 July.

Elizabeth Peyton's Portrait of Alice Neel in 1931 depicts the artist unclothed and contemplative in what was a pivotal year for Alice Neel. In 1931, she was released from asylum, having previously suffered a breakdown following a series of traumatic events.

Yayoi Kusama, ever interested in the proliferation and repetition of image and self-image, contributes surprising new works from a recent body of portrait paintings, while Grayson Perry's ceramic portrait Transvestite looking in a Mirror depicts the artist as his alter ego Claire.

Celebrated as Trinidad and Tobago's leading contemporary painter, the late Boscoe Holder (1921 - 2007) creates a vital and intimate atmosphere in his portraits of West Indian men and women. Often sexually charged, the paintings, modest in scale, reveal a careful attention to describing the nude physique and postures of the human body.

Philip Pearlstein's realist works, on the other hand, in which flawlessly rendered figures are arranged amidst an array of props, are more akin to still life compositions, in which figure and object are on equal terms. His works have been discussed as a form of abstraction, in the sense that his use of pictorial space emphasizes a detachment of his subjects from lived experience, and a freedom from emotional or psychological investment.

NS Harsha has taken a more conceptual approach to making a portrait, creating a work that upon close inspection appears to be a bird's-eye view of a gathered crowd. From a distance, a darker form appears behind these faces: a singular human figure, in shadow - a representation of absence.

Whilst taking Neel's work as a point of reference, the exhibition aims to open up possibilities for reading figuration and portraiture in contemporary painting, to assert the continued relevance of these modes of practice, and to re-consider Neel's work in relation to artists working today.

Alice Neel: Painted Truths
Originating at the Museum of Fine Arts, Houston until 13 June, this extraordinary survey of Alice Neel's work will be on view at the Whitechapel Gallery in London 8 July to 19 September 2010, and will continue on to Moderna Museet, Malmö, Sweden, 9 October 2010 to 2 January 2011

Alice Neel: Painted Truths is accompanied by a fully illustrated catalogue of the same title published by the MFAH and distributed by Yale University Press. The catalogue contains major essays by art historians Tamar Garb and Robert Storr, as well as by curators Lewison and Walker, who also contribute chapter introductions and entries on each work. In addition, three short appreciations are included by artists who admire Neel: Frank Auerbach, Marlene Dumas, and Chris Ofili.
www.victoria-miro.com