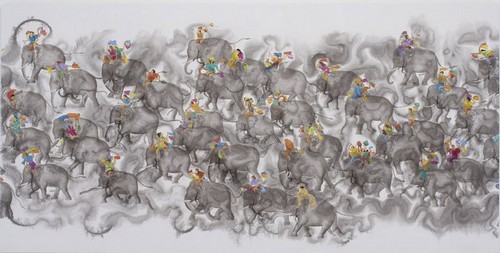 Victoria Miro Gallery and Iniva present the first solo shows in London by Indian artist NS Harsha. Working across media including sculpture, installation and community-based collaborations, NS Harsha is known for his paintings that often depict fields of vast, sparsely detailed space populated by highly individuated figures in miniature as well as his installations that are often site-specific and political in scope. At Victoria Miro he will present a series of new paintings and an installation created specifically for the exhibition, whilst at Iniva he will present his monumental installation Nations.

The works are loaded with intelligent political or social commentary, and draw on both popular culture and traditional narratives as they interweave local and international points of reference. Harsha has always been interested in art and its relationship with cultural representation and misrepresentation, and therefore location - whether geographical, political, social or cultural - plays an essential role.

A new group of paintings will be presented in the main gallery, all of which revolve around ideas of meaninglessness and the absurd. Taking on the challenge of representing on canvas the absurd within human nature, Harsha here furthers his exploration of humanity en masse, with an underlying sensitivity for the individual as well as the group. In his words, 'I continue to search for a way in which to portray large crowds or gatherings and their collective absurd acts. It is interesting to observe a crowd which has lost its collective rationale - or its attempt to achieve a collective rationale!'

Harsha's first engagement with these ideas resulted in the recent work Spot an innocent civilian, in which rows of standing halo-adorned figures appear as though they are part of an identification lineup, presumably for the viewer to appraise and determine the 'innocent' of the title. Harsha often invests his work with an awareness of the medium, in which the figures become an audience for a presupposed viewer, who in turn becomes complicit with or somehow activates the incident depicted. The work grew out of fascination with the term 'innocent civilian' repeatedly heard in media reports, which, for Harsha, came to signify another exploited byword used to various ends in the global political arena. He set himself the rather absurd task of trying to identify 'the innocence' in passers-by, a futile attempt to try and define sets of characteristics that might successfully define innocence. In the upstairs gallery Harsha will present a site-specific installation comprised of integrated painting and sculptural elements.
www.victoria-miro.com