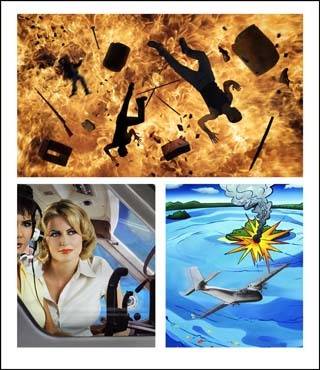 Highly regarded for her formal and stylistic experimentation in film, photography and video, Tracey Moffatt’s work reformulates stylistic motifs of popular and visual arts culture. Mining the images and narratives of her vast visual memory, she draws particular inspiration from the film and television she was exposed to as a child.

In a manner analogous to filmmaking, Moffatt employs cinematic staging, artful composition and orchestrated choreography in her photographs to create the striking comic-strip style tableaux of Adventures. Combining ‘The Flying Doctors’ comic books she read as a child, 1970s television and a dash of ‘007, Moffat directs a team of models, designers and graphic artists to manufacture the glossy retro artifice of the photographs. The artist herself is complicit in the action, in one scene cast as pilot steering a plane into a fiery inferno, in another, as temptress.

As is characteristic of her previous work, Adventures is driven and styled by an unregulated narrative, in which the stereotypes of race and gender - the poster boy hero, the exotic ‘other’, the submissive starlet - are played out to ambiguous ends. Each of the ten photographs is divided into three frames, and within each of these an individual story is composed. Deliberately resisting linear narrative, Moffatt prefers to leave the work and its cinematic imagery open to imaginative interpretation.

In the project gallery, Tracey Moffatt presents Love, a video piece that revisits the cut-and-paste format used in Lip 1999 and Artist, 2000, carefully splicing together scenes from some of the artist’s favourite Hollywood melodramas. Cinematic cliché gives way to a darkly sexy feminism with hours of film edited to a succession of passionate embraces, acts of betrayal, frenzied violence and finally revenge.