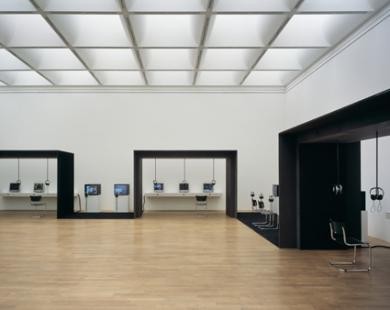 The Videonale is not merely a festival; the exhibition itself takes centre stage, as it now, after a longer break, once more presents itself with renewed splendidness in Kunstmuseum Bonn. Featuring discussions on current topics in video art, lectures, artist discussions and other events, it embodies the video art scene of the region, which has long been a centre of video and media art.

From 29 April to 16 May 2005 the Videonale 10 presented a total of 47 works by international video artists in Kunstmuseum Bonn. With 2700 visitors in its three weeks run and thousands of visitors to this website during the past three months, it went far beyond all previous figures.

It was not only the art works selected that attracted visitors, experts and the press, but also the successful and innovative exhibition architecture by Jochen Specht combined with the supporting programme, particularly the symposium on ?exhibition design for video and media art?, that have provided for positive reactions throughout.

Therefore I?d like to thank all those without whom the Videonale would not have been possible: the entire Videonale 10 team, the Kunstmuseum Bonn, our patrons and sponsors, the technical and media partners, and, of course, all the artists submitting their works. Thank you!