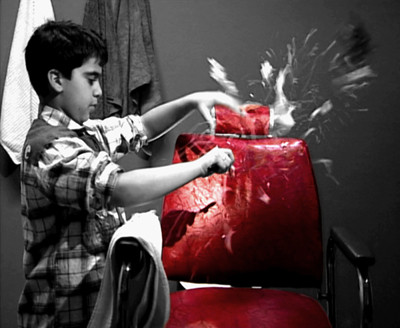 We are pleased to announce the first solo-exhibition of Adel Abidin in Austria.

Adel Abidin was born in Baghdad in 1973. He earned his Bachelor’s degree in painting from the Academy of Fine Arts of Baghdad. In 2003 he started his Master’s degree at the Academy of Fine Arts in Helsinki. Since then he has been working with videos and video installations. Abidin’s works have been exhibited in several venues and festivals around the globe. With his fictive travel agency ‘Abidin
Travels’ he represented Finland at the 52nd Venice Biennial in 2007.

In his art practice Abidin focuses on issues such as cultural alienation and marginalization. Sarcasm, humor and irony are central to his
language.

How could I symbolize a fundamentalist? This question led me to ask 4 boys to act like barber-apprentices in order to remove the foam with a cut-throat razor from balloons. I was anxiously waiting for the reactions of these balloons, as normally most of the balloons would be exploding.

TASTY 2008
Video installation consisting of 2 videos and a cardboard.

What’s the real relationship between the inside and the outside ? Who is in and who out ? That was the formula which lead me to think of doing
this project. In most of the works presented in this show I am considering the symbol and how it affects our daily lives. I simply built a mosque out of sugar cubes and placed it next to an ants heap. Of course the ants started wondering around the mosque, climbing its walls, breaking in. Did they now come because of a ritual need, to build or to demolish it ?