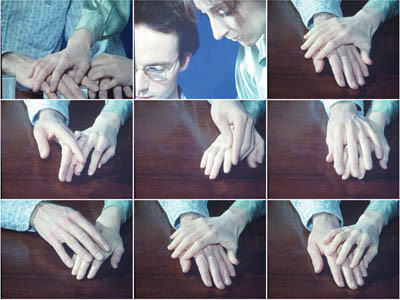 The figure of an ambiguous casement comes to us in the initial image sequence of Arkhé. We are confronted with full-frame shots of surfaces, generally long takes of mottled and indigent convolutions of matter - skin - submerged in a viscous, slowly swirling liquid: a preservative solution. These views of an enclosed, suspended state of decay echo with the sound of an exterior environment. The drone of a street impinges and reinforces the optical concentration that these images seem intent on safeguarding. Whether it is we who are the bound subjects - refracting sonic coincidence coming through an open window - or those viewing it from outside - contingently glimpsing the exterior of a monadic enclosure - our positions and points of identification are immediately put into a delicate balance.
Rather than resolve these questions into a representation, Fraser's film redeems them with interspersed cuts into these surfaces, opening the possibility that viewers will be momentarily placed back into their seats. The curated remnants of optical experience are here shocked into emblematic fragments, interrupting their contemplative quality by instants of a black screen. These tactile impressions push the formaldehyde tableaux into allegories of the occlusion of a clear path to its object. We are pointed toward obliquely angled thresholds to the straight gait of a desiccated pact between sensuous experience and rationality.
- Excerpt from a text by Sam Lewitt

Megan Fraser graduated from the MFA at Milton Avery Graduate School Of The Arts, Bard College, New York in 2008. She has participated in exhibitions and film programmes at the Whitechapel Art Gallery, London (2008), Reina Sofia National Museum, Madrid (2008), Miguel Abreu Gallery, New York (2008), Koelnischer Kunstverein, Koln (2006) and The Walker Art Centre, Minneapolis (2005). Later this year her work will be shown in an exhibition at the International Project Space, Birmingham.

This short film is Mangolte’s second film shot in the 70s when the artist moved from Paris to NY and became the photographer and cinematographer of the performance art scene in NYC. Among many others Babette Mangolte worked with dance performers Yvonne Rainer and Trisha Brown. Their new ideas of conceptual performance and object relations in dance informed Mangolte‘s own filmic aesthetic as much as the enigmatically anti-expressive styles of film director Robert Bresson and the structuralist realism of Chantal Akerman for whom she was director of photography. The style Mangolte developed in her films in the 70s is a unique fusion between New York conceptualism and the new French realist sensibility, processed through the artist’s strong intellectual sense of imagination. The actors in "(Now)", Linda Patton and James Barth, were performers in Yvonne Rainer‘s provocative new choreography. Babette Mangolte had worked already with Linda Patton and James Barth in her first film What Maisie Knew (1975) which used elements of minimal performance for an abstract narration based on Henry James‘ novel.