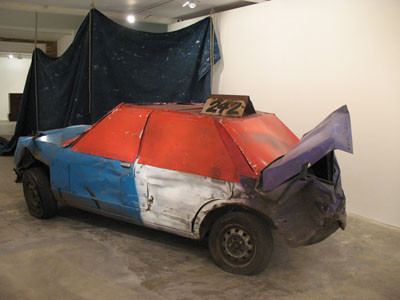 Vilma Gold is pleased to present a new exhibition of work by Brian Griffiths.

Brian Griffiths views art as a means of escape, a repeated and heroic attempt to leave the here and now and be transported to other places, other times and by extension, other psychological states. Through past works we have been asked to journey into space (via cardboard super computers), to travel to mysterious lands (via a galleon made from wooden furniture) and promised all kinds of imaginary excesses with his varied material transitions.

In a new series of sculptures ‘Another End’ presents a drama where a resigned ‘lostness’ and ‘used up-ness’ is rampant. It infers a kind of relentlessness, a laughable existential angst butted against the optimism of a new improved conclusion. The sculptures appear as distinctive players: A bear head with its roughly patched concrete surface and painterly graphic face has an air of an old school entertainer, a wooden box with its numerous openings and gleaming tan brogue shoes is enigmatically quiet, an over-plated concertinaed metal car lump is a somewhat comical showy beast. They all desperately want to be more, to be back performing in another place – instead they sit, wait and put on a brave face. The over zealous lick of brightly coloured paint on the banger car, the daft smile of the bear, the over polished wooden surface is a bravado that is disturbingly fragile.

In Griffiths’ work traditional genres of sculpture are reworked and rethought predominately through the assisted readymade or the fabricated found object. The stone monument, the wooden carving and metal sculpture are all revisited with disarming directness and ingenuity. For Griffiths, conceptual rigor is bound up with processes of making, so everyday materials and objects are selected for their potential to transform and to create rich, evocative experiences. In part Griffiths uses sculpture to inquire into ideas of the flawed and the failed. Employing complex sculptural languages and diverse references Griffiths skillfully confuses categories of the found and the made, the everyday and the fantastical, the humorous and the melancholic. The deliberate bluntness of the work propels the viewer immediately into a landscape where the supposedly familiar is scrutinised. Griffiths transforms everyday objects and base materials into remarkable encounters that question our experience of the contemporary world. Aspirational, and yet tragically flawed, Griffiths’ works are charged with humour, discontent and sadness.

Brian Griffiths was born in Stratford-Upon-Avon in 1968, and lives and works in London. Last year Griffiths produced a major installation for The Furnace Commission at A Foundation, Liverpool. He has exhibited widely including important solo exhibitions at Arnolfini, Bristol (2007), Galeria Luisa Strina, Sao Paolo (2005), Camden Arts Centre, London (2004), The Breeder, Athens (2004). Later this year Griffiths is exhibiting at Lustwarande 08 – Wanderland at the Fundament Foundation, Tilburg and is also taking part in a series of commissions at the Royal Academy.
www.vilmagold.com