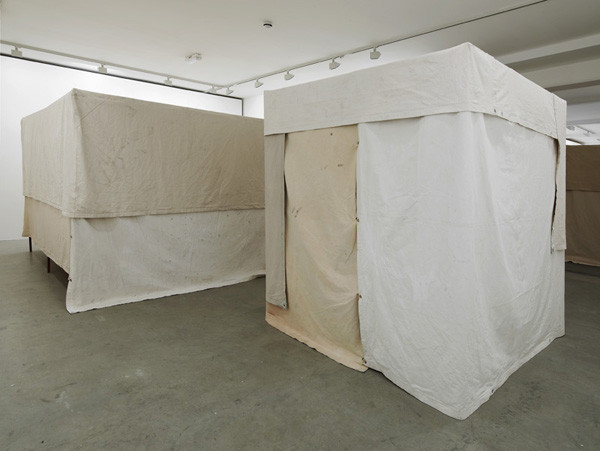 Vilma Gold is delighted to present ‘The Invisible Show’ by Brian Griffiths.

Filling the gallery space with concealed cuboid structures, Griffiths considers whether an exhibition can be an absurd feat of invisibility. H. G. Wells’ protagonist in The Invisible Man (1897) attempts to hide his transformation from the world through excessive bandaging and disguise. His attempts are futile of course, for in the end he succeeds only in becoming more conspicuous by the very effort of his concealment. Likewise, it might transpire that Griffiths’ attempts to cloak his exhibition in skins of beige tarpaulin only serve to make its invisibility all the more explicit. The show will be of ‘readymades’, of sorts: The mass produced multiple in the form of the cuboid metal frames, and what Griffiths refers to as the ‘fabricated found object’ in the form of the tarpaulins covering them; these being singular, touched, expressive yet understated surfaces.

In a sense Griffiths treats the gallery space as a microcosm, an enclosed beige universe of its own. The universe becomes the ultimate gigantic container: A gigantic beige container; a cosmic latte, unibeige, skyvory, an everything container. Within it are stored more containers; smaller ones, more beige, forever non-colour, uni-colour. The objects might mark separate units; bounded entities shifting through the world, our cities and our houses, perpetually experiencing others and ourselves through this constrained condition. Dressed up in their worn and torn fabric, they ask the viewer to look at them, into them, to fill the gap. They appear rather make-shift, temporary, used up, insufficient even, but lacking any of Griffiths’ recent pop imagery their theatricality is played out with vastly reduced means.

The title The Invisible Show flips worryingly from a perfunctory description to nonsense. It elicits rash questions and sets the imagination off to freak shows, illusionists and stunts. As with Wells’ novel, Griffiths’ new sculptural works, despite all their corners, vertical services, lines and cumbersome space attempt to mingle in with the whiteness of the gallery; to disappear, to become insignificant. Lacking the gallery’s stability and purity however, these baggy and used objects might only serve to bring its artifice of neutrality into sharper relief. Brian Griffiths was born in Statford-Upon-Avon (1968) and lives and works in London. He has had solo exhibitions at A Foundation, Liverpool (2007), Arnolfini, Bristol (2007), Galeria Luisa Strina, São Paulo (2005), and Camden Arts Centre, London (2004). Griffiths was included in British Art Show 7, 2011, in the Days of the Comet, a Hayward Touring Exhibition at Plymouth City Museum and Art Gallery and he was included in exhibitions at Tate Britain, London, Hayward Gallery, London, Nottingham Contemporary, Centre for Contemporary Art, Glasgow and at The Mattress Factory, Pittsburgh last year. In 2011 Griffiths’ first monograph was published by Koenig Books. In 2010 Griffiths was nominated for the Fourth Plinth Commission, Trafalgar Square, London. He will have a solo project with the Grundy Gallery, Blackpool and a solo show at Galeria Luisa Strina, São Paulo in 2012.
www.vilmagold.com