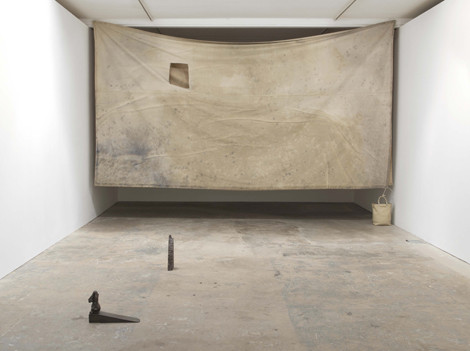 ‘The Extension’ seeks to set up a conversation between sculptures, materials and the act of building; a modest conversation where form, surface, size, and weight are casually but precisely discussed, where process nearly becomes subject matter and sculptures almost begin to perform.

The works in the exhibition show particular relationship to labour: of diverse physical actions, of time spent (long and short), of collaborative or individual endeavour. The organic and natural elegantly co-exist with the urban and architectural. Outside and inside (world and art, matter and space, - the edges all blurring), top and bottom, real and propositional become entangled digressions. Abstraction or the abstracted hang in the air mixed with utility, of industry and everyday experience. The Extension’ is a show that solidifies thought, creates movement via the inert and reflects the shifting absurd backdrop of our daily life.

Brian Griffiths (b.1968, Stratford-Upon-Avon) lives and works in London. He has had solo shows at: Vilma Gold, London (2008); A Foundation, Liverpool (2007); and Arnolfini, Bristol (2007). In 2010 his work was included in exhibitions at: Tate Britain, London; Hayward Gallery, London; Nottingham Contemporary, Nottingham; Centre for Contemporary Art, Glasgow; and The Mattress Factory, Pittsburgh. Further selected group shows include: CAPC Bordeaux (2009); and Fundament Foundation, Tilburg, The Netherlands (2008). In 2010 the artist was nominated for the Fourth Plinth Commission, Trafalgar Square, London. He will have a solo show at Grimm Gallery, Amsterdam in 2011.