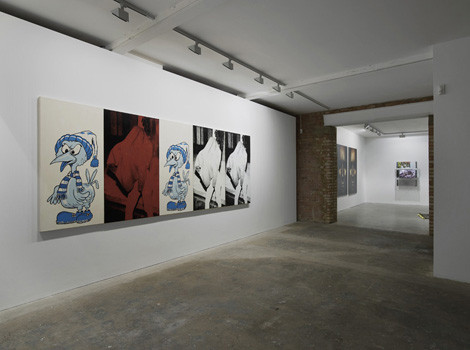 Vilma Gold are delighted to present an exhibition of work of seven artists, many of whom - Trisha Baga, Helena Hunek, Julia Wachtel and Katharina Sieverding - are shown in London for the first time. The artists can loosely be linked by an awareness of their subjectivity; rather than work back from an existing or even vetted larger order, they look to themselves, their own
system of being, as an individual in society, to build outwards in multiple directions and speak as they go.

Czech-born, German artist Katharina Sieverding’s (b.1944; Prague, Czechoslovakia) highly influential practice spans nearly four decades and includes photography, film, and installation. Employing the close-up to challenge conceptions of the relationship between photography and cinema, Sieverding explores areas where these interdependent forms of media coincide and diverge. This exhibition focuses on her large-scale self-portraits, which often appropriate the scale of movie screens and billboards and compose a significant portion of her oeuvre. For this exhibition, Sieverding presents her seminal work IX (1977), a monumental four-part photograph, taken on a New York City rooftop during the notorious blackout in the summer night of 1977; this work also lends the exhibition its title.

Julia Wachtel (b.1956; New York, USA) is fascinated with the visual language of mass culture. Her paintings enter into a visual language game wherein the appropriated vernacular of mass culture is illustrated, simulated, relicated, altered and parodied. The logic of this language is disturbed just enough to provoke a meditation upon the conditions of meaning intrinsic to that vernacular. In her paintings, Watchel inserts grotesque, irritating cartoon characters – popular with the middle class in the 1960s and 1970s when they were seen on greeting cards, bar supplies and T-shirts – into the “readymade” lexicon of mainstream magazine and newspaper photographic images which document the contemporary socio-political landscape of the time. For this exhibition, Wachtel presents her multi-panel work Procession, from 1989.

Trisha Baga (b.1985; Venice, Florida, USA) is a New York based performance and video artist. Of her practice, Baga writes of an idea of ‘present-ness’: she sees her process, and self, as like a dot on a line. Unable to impose an end point from the outside, the only thing to do is to look to what can be done now, to what can be said, with the materials and the self to hand and embark upon a trail. For this exhibition, the artist will present her performance video work Madonna y El Nino (2010), a non-fiction Filipino folk tale, made primarily from media produced by Madonna the pop star, using the El Nino weather phenomenon as a metaphor for changes in the pop landscape brought about by digitization and the internet.

Ann Craven (b. 1967; Boston, USA) uses clichéd subject matter, such as flowers, moons, cutesy birds and dewy-eyed fawns in her multiple wet on wet paintings. She neutralizes her storybook content through continual variations and repetitions, thus removing any sense of preciousness in the work whilst shifting the conversation about her work into a theoretical frame that considers the body as a whole, rather than its individual parts. By reworking, re-presenting and returning to the same stock subject matter, Craven engages questions of consumption, collection, authenticity, value and skill. She examines the durability of a painted icon in a world that consumes mass imagery at record speeds.

Michaela Eichwald (b.1967; Cologne, Germany) makes neo-bohemian bricolaged sculptures and paintings, which suggest life beyond their simple means. In the past, Eichwald’s layered paintings have included such collaged elements as books steeped in thick spills of enamel or texts by other authors and artists. Details of objects are glimpsed through their surface suspension (in resin or varnish) but nothing is ever explained or clearly shown. As finished product, Eichwald’s paintings allow the viewer
to feel included in the process of handling material. It has been said that her works function like an index for the connectivity between sensual and intellectual activity in general, and that in this way it advocates subjective practice. For this exhibition Eichwald presents two new large-scale multi media paintings.

Helena Huneke (b.1967; Luebeck, Germany) is a German artist who lives and works in Hamburg. Her paintings and collages often incorporate sections of found fabrics such as bedsheets and tablecloths, which are painted, folded and overlapped. Sometimes positioned on the floor, sometimes draped and hung in varied configurations, a certain vulnerability permeates the work, a unique vulnerability that is fearlessly exposed. Huneke has talked of faces appearing in the work through the action of
folding and unfolding. For this exhibition she presents Der Plan (2011), a painting/collage work composed of abstract colour fields painted onto a folded linen sheet and incorporating the silhouettes of two figures cut from newspapers.

Hannah Sawtell’s (b. 1971; London, UK) multi-disciplinary practice scrutinises the excess of production, through objects, image, text, video and sound. Her ongoing actions utilize a system of collation and manipulation of surfaces retrieved from the digital realm, collonized spaces and simulated matter; she manufactures works that navigate utility, connecting praxis and spectacle. This exhibition shows a recent work from her ‘Optic’ series. Structures that vascilate between window, shelf and
screen are industrially manufactured; hand pasted with images that she creates by using current computer programs. All image capture, manipulation or slicing is made by the machine. A floor work from her ‘Mole’/ ‘Egressor’ series will also be shown.
www.vilmagold.com