The Ground Around: Idylls, Earthworks & Thunderbolts 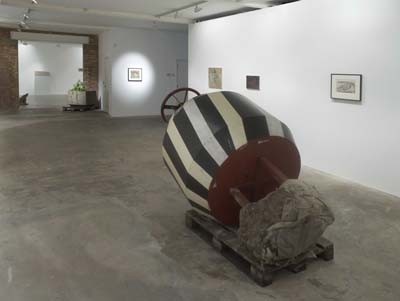 “The Earth’s surface and the figments of the mind have a way of disintegrating into discrete regions of art.
Various agents, both fictional and real, somehow trade places with each other - one cannot avoid muddy thinking when it comes to earth projects, or what I will call ‘abstract geology’.
One’s mind and the earth are in a constant state of erosion, mental rivers wear away abstract banks, brain waves undermine cliffs of thought, ideas decompose into stones of unknowing, and conceptual crystallizations break apart into deposits of gritty reason.”

Robert Smithson: The Sedimentation of the Mind: Earth Projects (1968)

The ground, depicted literally in the gritty surface of ‘Slag Heap’ by Prunella Clough and the ‘avalanche’ of Wolfgang Tillmans, reminds us of the energy and beauty contained within the Earth; Dan Peterman and Isa Genzken choose to examine this area more intimately by focusing on the nature of the material both under and on the surface of their respective studio floors, while the experience of the muddy intractability of trench warfare provides the starting point for Paul Nash’s pastel of 1917. Waseem Ahmed’s contemplative suicide bomber and Ian Hamilton Finlay’s use of Nazi-era iconography, equate illusions of paradise and gardening with terror and blitzkrieg, while Manfred Pernice’s ocean- going buoy seems to have been just dumped onto land after a mythical storm, a beachcomber’s trophy. The selection of these works for an exhibition is in no way an attempt to represent a movement or style or suggest an inter-generational pattern spanning almost 100 years. The curious theme that flows through the show however, is that of an on-going fascination amongst certain artists with trying to tackle the complexities and elusive nature of the space directly below and immediately around our feet.
These are not simply downward glances, earthscapes or ‘Land Art’ as such, but works which continue an inquisitive exploration into this most psychologically charged of spaces, unique for each of us, a spatial zone that can only be felt and most likely never grasped.