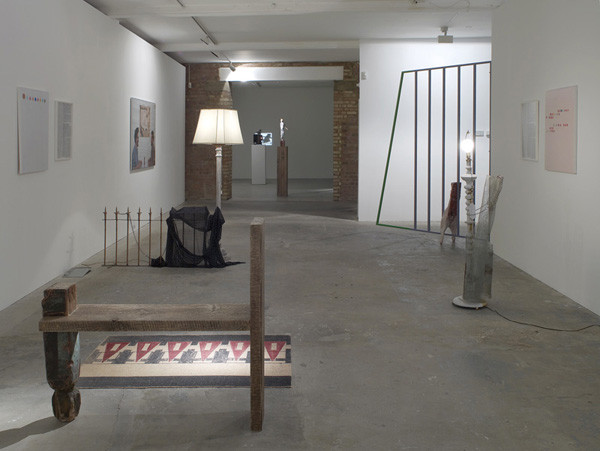 We are guided around the picture by a sequence of triangles: The suddenly illuminated section of bright green grass outside leads us down towards the young boy's face, Pierre, whose eye is in turn overcast by a rhyming streak of black. This shadow, momentarily thrown by the flickering candle light beside him, acts as an arrow, directing our gaze to the sharp geometry of the metronome atop the piano; inexorable, keeping time, puncturing the wilder marks of the balcony's ironwork behind him. Matisse's 1916 painting 'The Piano Lesson' shows the living room of his home at Issy-les-Molineaux. This central movement through the work is enclosed by two figures: a straight-backed, straight-lined woman in the back corner; blank faced, terse, almost monochrome; and a representation of his 1908 sculpture 'Decorative Figure', who at the front is all curves, lying back, earthy brown, an image of relaxation. Discipline and sensuality are compared, contrasted, interlinked, and marked by the burning candle and metronome, past and future also.

In some senses simply a celebratory homage to a brilliant painting, this group show will take the opportunity to consider some of the many possible themes and avenues set up by Matisse's work. This might happen on very direct, visual terms, as with Josef Strau's piece, My Soul Is Filthy But Your Word to Me is Like the Lamp for the Thief on Your Heart (2010), consisting of a lamp beside an iron railing which is overcast by a shadow-like piece of black material. Elsewhere Matisse's themes might be activated metaphorically. Hannah Sawtell's new intervention comes in the form of an iron gate at the entrance of the gallery. Unable to access the works hanging behind it, we are swiftly forced to occupy the position of the boy in Matisse's painting, who, under the watchful eye of his teacher, is unable to step outside and play on the grass glistening just beyond the balcony. This interior / exterior opposition will reappear throughout the show, guiding the hang, sometimes appearing as the dichotomy between work and play, focused concentration and more exploratory experimentation.

Markus Selg takes the small sculpture in Matisse's painting as his point of departure for a new sculptural figure, setting it beside a handmade rug and a carved wooden chair (all works 2012). Charles Atlas on the other hand, in his film Cartridge Lengths 1 from 1970 (and one of the artist's first) utilizes a single Super 8 cartridge length to record a dove fluttering around outside. Dancer-like, slightly trepid maybe, the dove moves around the lush grounds surrounding The Foundation Maeght where Atlas ended his first tour with the Merce Cunningham Dance Company. DAS INSTITUT meanwhile complicate the issue with a tableaux-like series of hanging transparent rubber screens (2011).

Matisse's painting might of course also be regarded more formally. Dianna Molzan breaks down painting to its fundamental material elements before rebuilding them in new, perhaps more physically aware, constellations. In a sense, she looks at what constitutes the apparatus of a painting, and, by extension, she dwells on the drama of presentation that takes place in the gallery, not unlike Will Benedict's sideways glances at how images are channeled and what does the channeling. Directly evoking Matisse's carefully balanced compositions are Michelle Abeles' photographs (all 2011), which, as with Nicholas Byrne's new painting, function on a series of stark colour relationships. Furthermore, Abeles' photographs often feature a male nude: Pierre now all grown up perhaps? Or simply a compositional device, an object amongst other objects enclosed within the frame.

Charles Atlas (b. 1949, Missouri) lives and works in New York. He has been producing film and video works since the start of the 1970's. Always experimenting with new technologies, his works move between the highly flamboyant and the very minimal, driven throughout by the desire to portray those around him. Throughout his career Atlas has been involved in collaborations with international performers and choreographers including Merce Cunningham, Michael Clark, Leigh Bowery, Marina Abramovic, Yvonne Rainer and June Paik. For Atlas, the theatricality of dance and performance is a point of enquiry into artifice, fiction and reality.

Michele Abeles (b.1977) lives and works in New York. Taking into consideration photography's repressed aspects - the support that holds the image, and the techniques used in the process of its creation – she looks at the way in which objects and bodies create spatial relationships within frames. Her studio constructions mix still-life flotsam with nude male bodies whose heads are often cut off by the frame – a strategy that positions the works as rejoinders to the com- monplace use of the anonymous female form as a prop for picture-making. She often overlays these studio arrangements with swathes of transparent colour; a compositional device that whilst appearing like a digital after-effect is achieved using analogue means.

Will Benedict (b. 1978, Los Angeles) lives and works in Vienna. His work encompasses painting, drawing and use of found imagery, often incorporated with frames and windows or other such devices. Recently the frames themselves have come into focus in his work, and their role as constructs, or channels for the conveying of something with the expectation of meaning.

Nicholas Byrne (b. 1979, Oldham) lives and works in London. Working on copper, linen and paper, his paintings disperse emergent figuration amongst an often highly elaborate and densely worked ground. In an intricate play of display and con- cealment, forms such as curves, loops and spirals recur. The work employs a diverse lexicon of art historical references, but takes particular influence from notions developed during the Rococo period concerning the motivating effect that sinuous form exerts upon the beholder's gaze, leading it around the surface of the picture as if following a dancer.

Luigi Ghirri (1943 - 1992) was an italian photographer and writer, known for his small-scaled, poetic urban photography. In his small color prints Ghirri evokes the figure of the flâneur, capturing the contingencies of modern cities. Using meta- physical titles for his series, Ghirri exploits the ambiguity of reality and its representation. The scenic images are char- acterized by a delicate composition of color and form. His photographs remain singular objects. The print's fading color has made them unique documents of the passage of time. Simultaneously, Ghirri's works seem to hint at the universal in fleeting moments.

DAS INSTITUT is an import/export agency founded in 2007 by Kerstin Brätsch (b. 1979, Hamburg) and Adele Röder (b.1980, Dresden). Working independently and also as DAS INSTITUT their work explores issues concerning authenticity of artistic creation and the value and utility of art and artistic formulations. The two artists repeatedly explore the theme of the virulent marketing of art and the persona of the artist today as occurs in corporate design and in image branding strate- gies.

Dianna Molzan (b. 1972, Tacoma) lives and works in Los Angeles. Her canvases engage in an open and unpredictable dia- logue with the history of abstract painting. While she uses a variety of material approaches that differ from one work to the next, each painting exhibits a subtle precision in its intention and execution. Although she works with traditional materials, such as oil on linen, she approaches her canvases irreverently, invoking elements of fashion, ceramics, and popular design whilst drawing attention to painting's fundamental apparatus and by extension its role within the gallery space.

Hannah Sawtell (b. 1971) lives and works in London. Her multi-disciplinary practice scrutinises the excess of production through objects, image, text, video and sound. Her ongoing actions utilize a system of collation and manipulation of sur- faces retrieved from the digital realm, colonised spaces and simulated matter. She manufactures works that navigate utility, connecting praxis and spectacle. Since 2009, her ongoing project, 'Intervention', consists of gate structures deployed at a specific border site in the gallery space and drawing a distinction between the 'active' in front of the gate and the 'inactive' behind it.

Markus Selg (b. 1974, Singen, Germany) lives and works in Berlin. Working in sculpture, video and digital prints, he merges myth, folklore, traditional craft and digital technology to consider the role of the artist in a contemporary context. Harking back to Wagner's concept of the Gesamtkunstwerk, he often begins with a fictional narrative in order to stage his artworks within a larger all-encompassing production to create highly symbolic experiential rooms.

Josef Strau (b. 1957, Vienna) is an artist, curator and writer living and working in Berlin. He describes his work as an ongoing story and as such much of his work is text-based and printed on pamphlets. Sometimes attaching his texts to freestanding lampshades, he playfully manipulates traditional aspects of literature such as the idea of the 'illuminated' manuscript. These automatic texts are somewhat deceptive, for although they might take the tone of personal revelation they are of course a fiction dealing in contingency, day to day vagaries and concealed truths, becoming rather more fragile, anti-narratives of sorts.
www.vilmagold.com